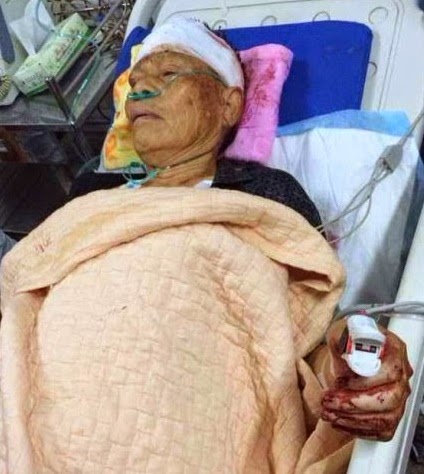 
(Wenzhou, Zhejiang—July 25, 2014) Fourteen members of the Wenzhou-based Salvation Church in China’s coastal Zhejiang province were injuring early Monday morning when government officials burst through the gates of the church to attempt to demolish the church’s cross.

Believers formed a human wall at the gates in order to protect the church’s cross, and many were injured in the resulting altercation. Below is a list of reported injuries. Following the list of injured Christians are two personal accounts of the events that occurred on Monday.

“The bloody crackdown against a peaceful church and its believers is absolutely a barbaric crime,” China Aid founder and president Bob Fu said. “All those who committed this crime should be held accountable. This blunt violation of Chinese citizens’ religious freedom should be unequivocally condemned by everyone of the civilized world.

“We pray for the quick recovery of many believers who were wounded and hurt by the Chinese security. History has proved already [that] the true church of Jesus Christ will not be impeded in any way by any forces in this world. Let’s pray and anticipate another major revival coming to China.”
The attempted demolition is thought to be connected with the province-wide demolition campaign that has been ongoing since February (see https://chinaaid.org/2014/03/update-zhejiang-churches-face.html and https://chinaaid.org/2014/04/exclusive-china-aid-receives-internal.html).

1. Zhang Zhimin, male, age 30, of Pingyang County, Wenzhou, was beaten with batons by police and security guards. Zhang was checked into Wenzhou Municipal No. 1 Hospital and placed under emergency observation. Doctors diagnosed Zhang with a skull fracture on the left side of his head, a mild concussion, a broken nose, a broken brow ridge, and further injuries to other parts of the body that need to checked.

2. Zhao Hongjin, male, age 58, of Pingyang County, Wenzhou, was beaten by police with batons outside the walls of Salvation Church. He was admitted to No. 2 Renmin Hospital, located in Shuitou Town, Pingyang County (the same town as Salvation Church). Doctors diagnosed Zhao with bruising and swelling of the chest and head.

3. Su Zhongshu, male, age 78, of Pingyang County, Wenzhou, was beaten with batons by police outside Salvation Church. Su was admitted to No. 2 Renmin Hospital in Shuitou Town, Pingyang County, where doctors diagnosed him with a fractured skull and bruised forehead.

4. Wu Quanquan, male, age 27, of Pingyang County, Wenzhou, was injured by police with batons as he stood at the door of Salvation Church. He was diagnosed with multiple bruises on the back of his head as well as bruises on the arms and neck. He was not admitted to the hospital.

5. Huang Minghe, male, age 34, of Pingyang County, Wenzhou was injured by police at the church’s door. He was not admitted to the hospital, but doctors determined he suffered broken bones in his left should and bruised arms from covering his head while being beaten.

6. Xie Zuozhong, male, age 41, of Pingyang County was beaten by police with batons at the door of the church. He suffered injuries to the back.

7. Xu Dingdu, male, age 41, of Pingyang County was beaten by police at the gate of Salvation Church. Doctors determined that Xu suffered a separation of the arm muscle from the bone, internal damage at the waist, bruising on the head, and ruptured blood vessels in his eyes.

“[I] stood at the door of Salvation Church to guard the church. More than a hundred security guards with batons in their hands rushed to [church members] standing at the door and beat up whoever was in their way,” Xu said. “I was dragged to the middle of the road by security guards and savagely beaten up by a batch of people, about a dozen. A second batch of people came up shortly after and gave me another beating.”

8. Li Qianbo, male, age 40, or Pingyang County, Wenzhou, was beaten after he attempted to pull police off the church walls that they were attempting to climb. Li was admitted to the Aojiang Hospital of Chinese Medicine in Pingyang County where he was diagnosed with a fractured skull at the back of the head and bruising to his back.

9. Wu Han, male, age 24, of Pingyang County was beaten at the door of the church. He suffered injuries to his legs and is recuperating at home.

10. Wu Changmin, male, age 30, of Pingyang County, Wenzhou, was beaten by police with batons outside the walls of Salvation Church. Wu suffered injuries on his head and shoulders and is recuperating at home.

11. Chen Xiudao, male, age 24, of Pingyang County, Wenzhou was injured by police with batons at the door of Salvation Church. He suffered cuts on his face and injuries to his legs.

12. Wen Jiangsheng, male, age 40, was beaten by police as he guarded the church’s door. He received bruises to the lower abdomen and shoulders and injuries to his right hand and both feet; he is recuperating at home.

13. Wen Zhixiang, male, age 31, of Pingyang County was beaten by police at the church’s door. He suffered injuries to his arms, back, and waist.

“I protected by head with my hands when struck by a police baton, which caused my arms to be injured. [I was] injured on the back and abdomen [after being] struck to the ground. I was circled and kicked by six or seven security guards.”

14. Xu Chengping, male, age unknown, of Pingyang County, was beaten outside the church’s walls. He received injuries to his forehead and back.

I participated in the whole process of guarding the church at dawn on July 21.

The guarding of the church was caused by the government’s attempt to forcibly demolish the cross on the top of the church building without paperwork and official written approval. The cross is the emblem of our faith and glory and shall not be violated.

When the special patrol vehicles entered into the intersection, members of Salvation Church gathered there and sat on the long benches they put there to block the police. Several elderly believers went to the front and blocked police vehicles with their body. They said, “Show us the government’s written approval before you take down the cross.” We knew the government did not possibly have the approval in written form to authorize the demolition of cross.

Believers who were ready to die for the cross had a white towel on their arms and they got in front of police vehicles. An elderly believer said, “I wear a white towel on my arm to mourn for God and for the cross. You people, you don’t have God in your hearts! How on earth does cross violate the law?”

The face-to-face confrontation between believers and police lasted for about half an hour. At about 25 minutes past 12 a.m. on Monday, July 21, 2014, the special police patrol vehicles left the scene.

However, during the confrontation, worshippers driving on roads noticed that the armed forces from Shuitou Town, Tengjiao Town, Xiaojiang Town, Pingyang County, etc, had been gathered at the Shuitou Town Government building and the Shuitou Public Security Bureau.

On Monday, July 21, 2014, between 12- 2 a.m. a few patrol vehicles passed by and a fire engine passed by two times. We thought they would use high pressure water guns to dispel the gathered people.

Believers who kept track of police actions found that all the paramilitary police, SWAT, and city management personnel were resting in their vehicles.

At about 2:50 a.m. of Monday, July 21, 2014, the Pingyang County Government dispatched special patrol officers, paramilitary police, traffic police, and city management personnel—at least 300 people in total. Holding police batons and riot shields, they gathered at the door of Shuitou Salvation Church and set up a picket line on both sides of Huancheng Boulevard about 200 meters (218 yards) from the church and closed the section for traffic. Residents in that area were also forbidden to get close of the church.

At about 3 a.m. on Monday, July 21, 2014, SWAT began to break into the door of Salvation Church. About 20 church members guarding the door were savagely beaten up. Each believer was surrounded by four to five people who used riot shields and batons to attack. In the meantime, some believers inside the church got angry and wanted to throw chairs out to counterattack the police, but were stopped by other believers among them. Still one chair was thrown out and was thrown back in the church. Fortunately no one was injured by the chair.

The SWAT rushed to the door of the church like a flood, ruthlessly sweeping over the men guarding the door.

SWAT breached the door of church. Christians in the church were united in mind and blocked the raid. Meanwhile, an elderly man at the door was brutally beaten up by SWAT and hit on the head. He dropped to the ground and left a pool of blood on the ground. He lay on the ground for over ten minutes while the SWAT outside the church just watched him bleeding indifferently.

On Monday, July 21, 2014, the confrontation came to a stalemate after the first raid. In the whole process, Christians cried out “Defend the cross and resist forcible demolition.” They sang out aloud, “The cross is our glory.”

At 4 a.m. Monday, July 21, 2014, the sky was getting brighter and worshippers throughout the county flocked to Salvation Church, [causing the] believers gathered outside the church [to] outnumber those inside the church. In the meantime, some unbelieving people joined them and helped them contend that the cross did not violate the law.

At about 4 a.m. someone shot up fireworks and firecrackers not far away to awaken people from sleep, which caused more people to come to the scene. In the meantime, the intersection is a major one and as dawn was to break, traffic got busier and the blockage of the road could not continue. As a result, the government agents left the scene.

Microblogs and blogs posted online about the police beating up of believers were all blocked and made inaccessible within a few hours.

At about 3 a.m. on July 21, 2014, at Shuitou Town in Pingyang County, Wenzhou, Zhejiang, about 500 policemen and city management personnel rushed to a patriotic and godly organization in Pingyang County—Shuitou Salvation Church—to demolish the cross of the church by force.

Facing completely unarmed believers, they beat up whomever they laid their eyes on and caused many to bleed and suffer injuries. It is hard to believe such a violent act happened in China, allegedly a nation of civilization and rule of law. Four people were severely injured and bled. Two of them were sent to Wenzhou for medical treatment.

When will these ignorant people wake up? Three hundred policemen, in addition to fire engines and city management personnel, busted into Shuitou Salvation Church in Pingyang County in order to demolish the cross of the church by force. The police behaved like gangs who rushed to the scene and beat up whomever they laid their eyes on. Many of the completely unarmed Christians at the scene were bleeding and suffered injuries.

More ridiculously, despite such an outrageous event, no media in Wenzhou reported it. You hypocrites! You are indeed the enemy and grief of China!

Quite a few non-Christian citizens stood up and uttered a voice of justice, criticizing the beating of believers, only to be circled and beaten up by a dozen of armed people. We saw it with our own eyes.