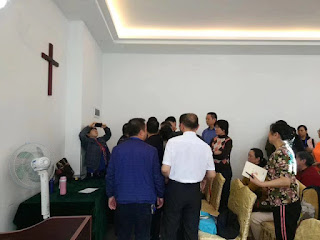 (Guangzhou—May 15, 2019) At least 15 churches have been harassed in mainland China since Sunday in a nationwide crackdown on the faith.

At 9:30 a.m. on May 12, state security officers from the local religious management bureau invaded Jinxiangtan Church in Xiangtan, Hunan province, and stopped one of the church’s elders, a man surnamed Huang, while he was preaching. One of the bureau’s agents ordered the church to stop all evangelical events.

On the same day, Renai Reformed Church in Guiyang was also stormed by personnel from local government departments, including the religious affairs bureau, national security bureau, police officers, auxiliary police officers, and others, which have not been named.

Christians gathered there for worship said the officers requested the pastor stop preaching.

The pastor requested that they show us official papers, and the officials said they were being penalized for holding “illegal religious activities.”

Agents from the religious affairs bureau warned the church attendees not to film the incident and threatened legal consequences if they refused. Multiple Christians were detained and interrogated for several hours before being released, and the pastor’s computer was confiscated.

Additionally, two churches in Guangzhou were raided officials on Sunday, and a local Christian, who spoke on condition of anonymity, said some of the church members were taken away by the police, detained, interrogated, and then released.

The same source said churches in multiple regions of China were simultaneously invaded and asked to cease holding services. In total, 15 churches have been harassed since Sunday, indicating a nationwide crackdown on the faith. The anonymous informant speculated that it might be because the anniversary of the 1989 Tiananmen Square Massacre is approaching on June 4. Typically, Chinese authorities suppress dissidents and religious individuals ahead of the anniversary, since the Communist Party considers it a sensitive event.

On social media, some individuals also speculated that these attacks might be part of a plan formalized by the Communist Party to eliminate Christianity, but ChinaAid has been unable to verify the existence of this plan.