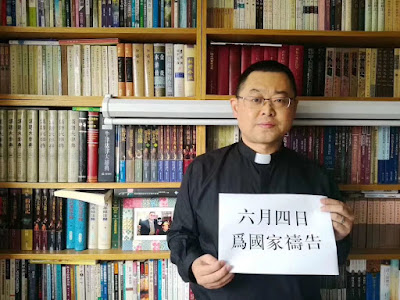 The church holds the prayer service annually on June 4, the anniversary of the bloodshed that took place in Beijing as authorities slaughtered students gathered to demand increased freedom. The central government has since tried to silence news of the attacks.

This year, the service was planned to take place from 7:30 p.m. to 9 p.m., but more than 20 officials broke into the church and arrested 17 people. Pastor Wang Yi and his wife, Jiang Rong, were taken while attempting to the block the door of the church administration office, and Li Yingqiang, a Christian who preached at the church, was struck in the face before being brought away, even though he never confronted officials. The others arrested included Zhang Xudong, Ge Yingfeng, An Yankui, Wen Guanghe, Liu Yingxu, Dai Zhichao, Ren Yifei, and Li Chengju.

Wang Yi was released this morning.

The same day, the church received a notice from the Qingyang District Ethnic and Religious Affairs Bureau and the Office and the foreign affairs office, accusing them of lacking proper registration. According to the government, the Regulations on Religious Affairs, which states in Article 20 that “No non-religious bodies or sites not for religious activities may organize or hold any religious activities, nor accept any religious donations.”

ChinaAid reached out to the police station, but the answering officer said they “won’t accept interviews.”

ChinaAid exposes abuses, such as those suffered by the members of Early Rain Covenant Church, in order to stand in solidarity with persecuted Christians and promote religious freedom, human rights, and rule of law.