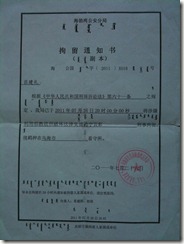 (Wuhai, Inner Mongolia—Aug. 22, 2011) Fifteen house church leaders from two remote regions of China have been in detention since mid-July as local police have tried to extort money from their families with promises of their release once the money has been paid and threats of labor camp sentences or criminal prosecution if it is not, ChinaAid has learned.
The incident began at 10 a.m. on July 26, when dozens of local police and officers of the Domestic Security Protection Department burst into a meeting in the city of Wuhai, Inner Mongolia, where more than 20 church leaders from Wuhai and Ningxia province’s Shizuishan were gathered to plan summer church activities.
The police surrounded the meeting site and apprehended 21 people. They also confiscated everything at the meeting site, not just Bibles but even the bamboo mats that the believers regularly use to rest and nap on after meetings. Everything was loaded into police vehicles and taken away.

The 21 detainees were later criminally detained on suspicion of “using a cult organization to undermine national law enforcement.” (See scan of detention notice above, and translation below.) However, police failed to notify the families as required, nor did they provide the families with the required paperwork for the detention.
Before the 21 detainees were transferred to the Wuhai detention center, they were given physical exams. Six of them were very elderly and were found to be in poor health, and the detention center refused to accept them. So they were released.
The remaining 15 church leaders were held for 15 days, after which, the Public Security Bureau notified the families that their case had already been sent to the prosecutor’s office. The families were told that if they raised 50,000 yuan (US$ 7,800), the detainees would be released. But when the families delivered the money to the prosecutor’s office, it turned around and sent the case back to the Public Security Bureau.
The Public Security Bureau then told the families that if they raised several tens of thousands of yuan (thousands of dollars) again, the detainees would be released. If not, the detainees would be sent to labor camps or would be criminally prosecuted.
To date, the following individuals are still being held in the Wuhai detention center:
Eleven from Wuhai –Church leader Dong Zhen, Ren Xitao, Mu Liandi, Mu Guilian, Ning Yuncai, Mi Lili, Huang Xiulian, Uncle Ye, Hao An, Sister Ding, Yu Baojie.
Four from Shizuishan – Dong Yanxia, Zhang Mingfeng, Zhang Shuxia, Da Yumei
ChinaAid founder and president Bob Fu was shocked when he learned of this case and has been following it closely. He severely condemned the local officials and called on them to “immediately and with no pre-conditions release these innocent Christian believers.”
“As the Bible says, ‘It is hard for you to kick against the goads,’” Fu said, quoting the words that God spoke to Paul of Tarsus, who had been brutally persecuting the early church, when he had his miraculous and life-changing Damascus Road conversion. “The church will not retreat in the face of persecution. In fact, it will grow larger and stronger with each passing day.”
The detention notice from the Haiboyuan Public Security Sub-bureau reads:In accordance with Article 61 of the Criminal Procedure Law of the People’s Republic of China, this bureau on July 26, 2011 at 8 p.m. has criminally detained Ning Yuncai on suspicion of using a cult organization to undermine national law enforcement, and is holding him in the Wuhai municipal detention center.