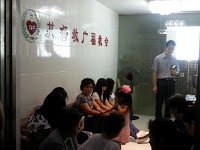 (Foshan, Guangdong—July 28, 2016) Government personnel in China’s southern Guangdong province seized 30 members of a house church in early July and took them to a local station for interrogation.

On the morning of July 10, officials from the religious affairs bureau and police department interrupted Olive Tree Church’s weekly worship service and took pictures of the scene. After confiscating church property, they took 30 of the congregants to the police station for questioning, sealed the church building and banned its members from meeting.

They also summoned Jiang Jianping, a church leader, and charged him with, “conducting activities in the name of a social organization without registration.” When Jiang Jianping’s mother was brought to the police station, she collapsed and was rushed to a hospital.

Authorities released most of the church members later that day, but four of them, including Jiang Jianping and Tan Xiuhong, a lawyer in England, were officially detained for four days.

According to local Christians, this was the worst persecution event their church experienced since Sept. 21, 2014, when more than 100 police officers raided Olive Tree Church and Ark Church and apprehended six Christians, including Tan Xiuhong, a lawyer who practices in England. That night, their families received notices stating they had been charged with “using a cult organization to undermine law enforcement.”

China Aid exposes abuses, such as those suffered by Olive Tree Church, in order to support and stand in solidarity with persecuted Christians.