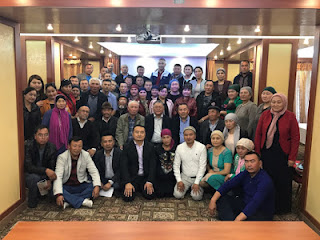 Gulisimuhan Bazhaerbieke, a 78 year-old woman who immigrated to Kazakhstan from Xinjiang, was detained by Chinese authorities and sent to a “re-education camp”—one of the region’s notorious centers for imprisoning, torturing, and brainwashing ethnic minorities—while on her way to visit her relatives still living in China on Dec. 2, 2017. Authorities alleged she failed to renounce her Chinese citizenship when obtaining her Kazakh one and put her under investigation. However, government personnel in Xinjiang often pin Chinese-born Kazakhs with false charges The officials say these efforts curb terrorism, but those arrested often have no terrorist ties.

In fact, Kazakhstan recognized Bazhaerbieke with a “Best Mom Award” for raising more than 10 children, according to her son.

Another Kazakh resident of Xinjiang, Hali Zhumabieke, was arrested by the Qinghe County Public Security Bureau while working in the Altay region and placed in a “re-education camp.” His sibling, Hadeer Zhumabieke, who lives lives in Kazakhstan, released a video asking for his release.

ChinaAid exposes abuses, such as those suffered by Gulisimuhan Bazhaerbieke and Hali Zhumabieke, and urges international policymakers to lobby for their immediate and unconditional release along with the rest of those unjustly held in Xinjiang, in order to promote human rights, religious freedom, and rule of law.