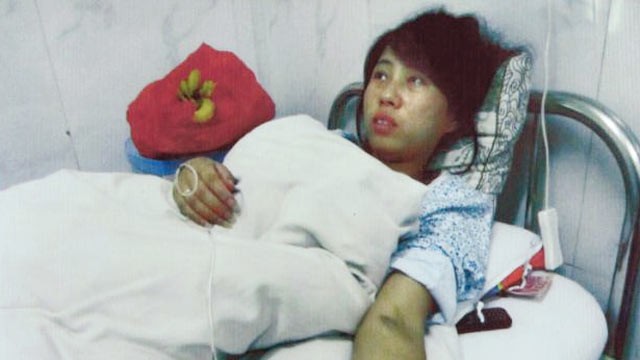 Feng Jianmei is shown after having her 7-month-old fetus aborted because she was in violation of China‘s one baby policy. (dzh.mop.com)

This week in China two similar cases on the issue of forced abortions, which the U.S. deems an extreme human rights abuse, are unfolding with potentially very different outcomes.

In the first case, the world was unaware of the abuse as it unfolded and nothing was done to stop it.

In the second case, the U.S. acknowledged awareness of events as they were unfolding. Whether that made a difference or not is hard to tell, but the victim has won at least temporary respite.

On Monday in Zhenping City, located in China’s Shanxi Province, a young husband worried about the fragile state of his wife, Feng Jianmei. According to Deng Ji Yuan, on June 1 local authorities forced Feng to have an abortion. He says his wife was seven months pregnant at the time. Graphic photos posted online by a Chinese activist group show what appears to be Feng in a hospital bed immediately following the procedure. Next to her is the small, lifeless body of her aborted baby.

On the same day in Changsha, the capital city of Hunan province, another mother felt enormous relief. Cao Ruyi, who says she is five months pregnant, is safe if only for the time being. Her relief follows an anxious few days.

She was detained by authorities. In an interview with ABC News, Cao described how Family Planning Police dragged her from her home to a hospital for an abortion. She says she was released only after signing a contract promising to abort her child by Saturday, June 16. Each woman already has one child. Cao and Deng, Feng’s husband, both said that because of this, according to Family Planning authorities they are in violation of China’s one-child policy. How much these couples want or can support a second child has no bearing on the rule of law.

News of Feng’s forced abortion started to spread throughout the activist community within China and beyond its borders. Xinhua News Agency ran a short account of her story. A response on the Zhenping Population and Family Planning Board website said that the woman’s pregnancy was outside the rules of the one-child policy.

Through “thought counseling” by the town cadres, the woman “agreed to end her pregnancy through an abortive operation.”

According to the report in Xinhua, an entity whose English name translates as the town’s “Birth Control Station” realized that Feng was three months pregnant in mid-March. According to Article 27 of the Shanxi Province Population and Family Planning Ordinance, Feng was required to apply for permission to have a second child.

According to officials in the Xinhua report, Feng was encouraged several times to submit the relevant documents. This included her hukou (the all important government identification of provenance which determines where one has rights to education and health care), proof of housing and “marriage and procreation.” She reportedly failed to do so. Officials from the couples’ home provinces concluded they were not eligible to have a second child. Official records show she had the procedure on June 2.

In addition to the report in Xinhua, the Global Times, which is published in Hong Kong, wrote an article criticizing the government for aborting a fetus over six months and suggested six months should be the cutoff.

Cao’s story took a different route. It got out earlier through a network of concerned locals savvy enough to alert non profit organizations dedicated to stopping forced abortions with ties in the U.S. government and international press.

“We’ve seen the reports that a Chinese woman is being detained and possibly pressured into a forced abortion by Chinese family planning authorities after purportedly violating China’s one-child policy,” she told reporters during a press briefing. “We have reached out to the authorities in Beijing to ask about this issue.”

Cao’s story started with a knock on the door last Thursday. With her husband away, she says there was nothing she could do to resist the “thugs” who came to take her to the hospital. She was placed in a room with four guards blocking any chance for escape. Her husband was eventually allowed to join her, but his arguments were ignored. Overcrowding may have helped her that day. Cao says she was told there was no bed available. She was “released” to a Family Planning hotel to wait for a free space.

Two additional factors likely worked in her favor. She was able to alert friends and family to her plight and she happened to be in a capital city, where news travels fast.

As Cao’s day came to an end in China it was morning in Washington D.C. The human rights activist network based in the U.S. and tipped off by sources in China went to work. For two particular organizations, All Girls Allowed and Women’s Rights in China, it was a crisis that demanded expertise in managing exactly how to pinpoint the most effective pressure points within China and to somehow hit them the right way.

By Friday, Rep. Chris Smith, R-N.J., had sent a letter to local Changsha officials. The Texas-based group ChinaAid published his appeal online. Smith has been a vocal opponent of human rights abuse against women in China. Most recently, he worked with ChinaAid founder Bob Fu to lobby Congress to intervene on behalf of the blind activist Cheng Guangcheng.

Smith addressed his letter to, among others, the “respectable leaders of the Kaifu District Family Planning Office” and condemned the actions taken against Cao Ruyi and called for the guaranteed safety of her unborn baby. She was released in the next 48 hours.

Chai Ling, the founder of the Christian activist organization All Girls Allowed and former student leader in Tiananmen Square, tells ABC News that according to Cao and her husband if they have the baby they will be forced to pay a “social burden fee” of nearly $24,000. This fee, an astronomical sum for the average Chinese citizen, is “required” for the child to be granted basic citizen rights such as access to health care and education.

Cao doubts she will ever be able to come up with that kind of money.

“She is too afraid to borrow the money,” says Chai Ling, “because she has no idea how she could pay it back.” Nor does she have any guarantee the government won’t ask for more money in the future. “That is the psychological pressure she is under,” says Chai Ling. “It becomes a money making operation for the government.”

Cao told ABC News she very much wanted to keep her baby, but she was unsure of what do to. For Cao, waiting for the June 16 deadline is torture, but every moment is also precious for the expectant mother.

Deng continues to search for answers, for himself and for his wife. What happened to them took place far away from any city center. As a migrant worker from Inner Mongolia, Deng had no pre-established relationship with any activist network to raise awareness.

By Tuesday in China, a story that had mentioned Deng and Feng’s case on the Zhenping city website had been removed. Any search for her name online led to an “error” message.

Neither did Deng have a chance of raising the fee that was asked of him. He told ABC News that Feng, who is 25, was so distraught over the loss of her baby she slit her wrists in an attempted suicide.

Deng believes that the abortion could have been legally prevented, even in China. There are exceptions to the one-child policy. Deng says that as a rural couple with one child who is a girl, they should have fallen into a category that allows for a second child. Now it is too late. He has yet to receive any kind of monetary remuneration or apology from the local government.

Audrey Wozniak contributed to this report