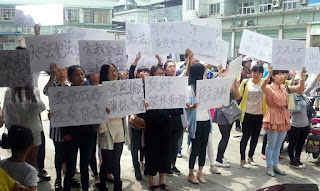 (Xuzhou, Jiangsu—Nov. 9, 2016) Local branches of government across China are currently increasing their efforts to suppress Christians and ban house churches, using a variety of means to do so.

On Sept. 28, authorities from Shandong province administratively detained several Christian students for doing missionary work on their university’s campus. After taking them to the police station, officials locked them in cells, hurled insults at them, and confiscated their phones.

Additionally, the local government in a district of Xuzhou, Jiangsu created a database containing the personal information of churches and Christians. On Sept. 18, the religious affairs bureau dispatched a team to investigate private Christian meeting places within its administrative area and filed information on how long the churches have existed, reasons behind their establishment, phone numbers of the persons in charge, security conditions of their meeting places, numbers of churchgoers, connections with foreign Christian organizations, and whether the churches follow policies established by the Three-Self Patriotic Movement. As of Sept. 22, the team mapped 15 of the town’s counties and identified more than 50 private places of worship.

Christians in Jiangsu also reported that authorities administered questionnaires to university students inquiring after their religious beliefs and practices, asking questions such as “Were you baptized as a [Protestant] or Catholic?” and “Did you attend the activities of your religion regularly and read religious books?”

In Liu’an, Anhui, government personnel announced that they would initiate a special campaign to restrict churches, which they claimed was according to the law. The purpose of the movement was to strike so-called “illegal behaviors” that they associated with Christianity, prevent foreign powers from using religion to infiltrate China, and maintain the “stability” of Christianity in China. Their primary targets are private church meeting places and pastors who have not been ordained by the state. Should the churches refuse to register with the government, they will be banned.

Authorities also plan to suppress churches that are under the control of “illegal” religious and international organizations.

In a county of Hengyang, Hunan province, officials dispatched a team to investigate churches, church leaders, and church personnel in September under the pretext of helping Christians register and file legal papers. The churches that were willing to comply were incorporated into the administrative system.

In addition, the Procuratorate in Lishui, Zhejiang, sued Ye Waiping, He Mingliang, Zhou Long, and Zhu Jianyou, all of whom attend Dongcheng Church, for protecting church crosses during a demolition campaign. Local Christians were very disappointed with the Procuratorate’s decision to prosecute the defendants and worried that the government would initiate another round of persecution. As a result, they demanded that the Procuratorate revoke the decision in order to benefit the public.

China Aid reports on abuses, such as those suffered by Christians throughout China, in order to promote religious freedom in China.