Advocating for freedom of belief, a UN organization calls for release of Gao Zhisheng 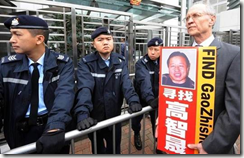 Members of China Human Rights Lawyers Concern Group outside the China Liaison Office in Hong Kong on February 4, 2010, demanding the release of Beijing human rights lawyer Gao Zhisheng. Whereabouts of Gao Zhisheng are still unknown today. (Photo: Getty Images)
According to a report from BBC’s Chinese website, today (March 28), a UN Working Group on Arbitrary Detention consisting of experts in human rights and international law from Pakistan, Chili, Senegal, Norway and Ukraine accused the Chinese Communist authorities of violating the international law by detaining the prominent human rights lawyer Gao Zhisheng. It calls on the authorities to release him.
Gao Zhisheng once served as a defense lawyer for Falun Gong adherents and exposed how the coal miners and other disadvantaged groups suffered. In 2009, he was taken away from the residence of his relatives. For a time in April of last year, he received interviews from foreign media, but his whereabouts after that have always been unknown.
Gao Zhisheng’s wife and daughter are now under asylum in the US. His wife Geng He published an article on Sunday’s New York Times in which she calls on US President Obama to pressure the Chinese authorities and urges Obama to contact Hu Jintao and ask him to let Gao Zhisheng’s family contact him and try to gain his release. When Hu Jintao visited America on January 19 of this year, Geng He also expressed her hope at a press conference that Obama raise these questions when he met Hu Jintao. She also described how Gao Zhisheng was tortured.
Analysts point out that China has in the past few months strengthened its restriction on the freedom of dissidents and human rights activists.
According to a report by New Epoch Weekly, Gao Zhisheng was born in a poor countryside in Northern Shaanxi. His father died when he was 10. In the subsequent days, he made his living by digging medicinal raw materials, digging coal and working at odd jobs everywhere. He dropped out of high school because of lack of money. Yet, he self-studied law for a college associate degree in a 3-year program for a career as an attorney-at-law. In 1994, he graduated from the self-study associate degree program, and in 1995 he passed the Chinese bar test. In 1996, he began his practice as a lawyer. Due to his own family background at the bottom of the social ladder, Lawyer Gao is full of sympathies for the disadvantaged social groups. He once said, “The very first lawsuit I took since I became a lawyer was a pro bono service. After that, I devoted one third of my energy to pro bono service for the poor. I adhered to this percentage in all these seven years.” In 2001, he was chosen as one of the Ten Honorary Lawyers of China.
On December 31, 2004, after Lawyer Gao got involved in the case of Falun Gong adherents in Shijiazhuang, he was fully sympathetic with the victims for their sufferings and was fully aware how CPC’s terror of power works. Therefore, he sent “An Open Letter to the National People’s Congress” in which he proposed that Falun Gong adherents should be protected by China’s Constitution. On October 18, 2005, he wrote his first open letter to Hu Jintao and Wen Jiabao. On November 29, after he and his colleagues broke away from about 20 plain-clothed agents who tried to stalk and besiege them, they went everywhere day and night in their investigations of the truth behind the persecution of Falun Gong adherents. On December 12, Lawyer Gao again wrote a letter to Hu and Wen titled “The Barbarian Acts of Exterminating Our Nations Conscience and Morality Must be Stopped!” After it was disclosed that organs were harvested from Falun Gong adherents alive in Sujiatun, Shenyang, he publicly declared he would participate in the investigation into the truth of Sujiatun Incident. Finally, he was arrested by the authorities on the charge of inciting the subversion of state power. Gao Zhisheng was praised as the “Conscience of China.” In 2008, he was nominated for Nobel Peace Prize. In exposing this persecution, he believes that “God is with us in facing and fighting the evil.”