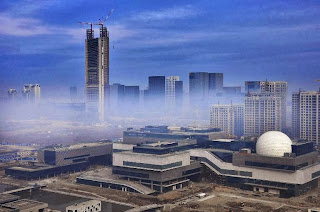 AFP: US doctor detained on bid to see China activist

AFP has reported that Devra Marcus, who was denied the right to medically exam China 16 dissident Zhu Yufu, was moved to do so after hearing of Zhu’s acute high blood pressure and fainting spells. Marcus went to China using the excuse of studying brush painting.

The full report can be read below:

Washington (AFP) – Two US citizens were detained Saturday in China as they tried to see a jailed democracy activist to examine reports of failing health, supporters said.

Zhu Yufu was handed a seven-year prison term in February 2012 in the midst of China’s leadership transition after advocacy that included publishing a poem urging people to congregate.

A Washington-based doctor, Devra Marcus, and her associate, Kody Kness, traveled to the eastern province of Zhejiang in hopes of examining Zhu.

But the two were denied entry by the prison authorities who instead detained them, according to ChinaAid, a US-based advocacy group.

The group released photos of Marcus on her trip and said that the US consulate in Shanghai was informed of the detention.

Marcus, in a statement recorded ahead of her trip, said that she was paying her first visit to China in hopes of studying brush painting but wanted to see Zhu at the request of her family.

Marcus voiced alarm at reports that Zhu, 60, was denied regular food and medication and had repeatedly fainted.

“Based on these reports, I am concerned that Mr. Zhu may be at risk of imminent death for want of medical care and treatment,” she said.

“The job as physicians is to take care of all patients, but the fact that Mr. Zhu is regarded as an enemy of the Chinese state places him at special risk of being denied medical care,” she said.

The United States has called for the release of Zhu and other prisoners seen as sentenced over peaceful political views.

Zhu ran afoul of authorities for writing a poem with the lines, “It’s time, Chinese people! The square belongs to everyone. The feet are yours it’s time to use your feet and take to the square to make a choice.”

Subversion charges are often used to jail government critics. Nobel Peace Prize winner Liu Xiaobo was convicted on the same charge in 2009 and sentenced to 11 years in prison.

Liu Xiaobo, who won the prestigious prize three years ago, is the only Nobel laurate in prison.