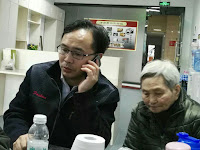 (Guiyang, Guizhou—Oct. 17, 2016) A prominent house church pastor in China’s central Guizhou province awaits prosecution after receiving news on Sept. 14 that his case would be transferred to the Procuratorate.

Pastor Su Tianfu, who is one of several Christians from Huoshi Church swept into legal proceedings as part of a government crackdown, consulted his lawyer after obtaining the notice. The attorney informed him that this marked the end of official investigation on his case and that it would be given to the Procuratorate for prosecution.

Su, who has been under constant government surveillance since Dec. 19, 2015, first came under scrutiny when the government issued an administrative penalty notice addressed to him, accountant and chairwoman of the church’s deacons Zhang Xiuhong, and church member Liang Xuewu on Oct. 21, 2015. The document accused them of changing the approved usage of an office from “business operations” to religious activities, despite having rented the space to hold church services.

The government demanded that they revert the space to its original use within 15 days or incur a fine that would accumulate 12,960 Yuan (U.S. $2,030) per day. However, officials froze the church’s bank account after Zhang attempted to withdraw funds at her beauty shop, leaving them without a means to pay the fine. In January, the amount totaled 110,296 Yuan (U.S. $16,768.00), and Su filed an appeal, which was rejected.

Because of their failure to pay the fine, the authorities recently doubled it.

Following this indictment, Su was charged with “divulging state secrets.” When asked about the validity of this claim, he said, “How can I have state secrets? This is for the report received by foreign media on how the churches are being persecuted. I forwarded the article on WeChat. A brother took a snapshot of this report and wrote a prayer letter. I forwarded the prayer letter.”

China Aid exposes abuses, such as those suffered by Su Tianfu and Huoshi Church, in order to stand in solidarity with persecuted Christians and promote religious freedom in China.