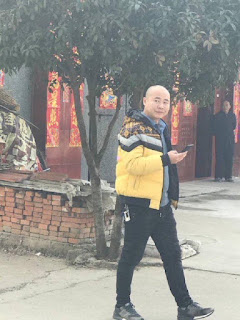 (Luoshan, Henan province—March 2, 2022) Jiang Tianyong, a prominent human rights lawyer in mainland China, has been in his hometown of Henan for nearly three years after his release. He is still under strict surveillance and illegal house arrest by the Chinese authorities.

At 3:00 pm Beijing time on February 23, people from the village committee of Jiang Tianyong’s hometown took [Jiang’s] parents to the village headquarters, stating that the Municipal Political and Legal Affairs Commission requested a meeting with them. Zhang Jiawen, domestic security police of Xinyang City, Zhang (full name unknown) from the Municipal Political and Legal Affairs Commission, Sun Zhanghong of the Luoshan County’s Public Security Bureau, Secretary Huang and Wan (full name unknown) of Lingshan Town were already there. It is said that if Jiang Tianyong wants to work locally or in Zhengzhou (Henan), they can arrange it; if he stays locally, the surveillance will continue as usual, and he will continue to be monitored like he always has; he is prohibited from going to Beijing or leaving the country. It is so unreasonable. Jiang’s parents left in anger.

Jiang Tianyong is over 51 years old, a native of Luoshan county, Henan province. He is a Christian and a human rights lawyer who was based in Beijing. He has participated in the Chen Guangcheng case, the Gao Zhisheng case, and many other cases to defend human rights. Due to his active participation in those cases, he has been under constant surveillance.

He was secretly arrested by Changsha police in November 2016 for assisting the “709 lawyers” and the families defending their rights. On December 1, 2016, Changsha police charged Jiang Tianyong with “inciting subversion of state power.” He was placed under residential surveillance at a designated location on November 21, 2017, by Changsha police. The Changsha Intermediate People’s Court then sentenced him to 2 years in prison, deprived of political rights for three years; his sentence was set till February 28, 2019.

In prison, Jiang Tianyong was forced to take medicine for a long time, which caused his memory to decline and his body to gain weight and become weak.

He has finished his sentence, yet Jiang Tianyong was placed under semi-house arrest in Xinyang, Henan province. The authorities built a shed near his house and sent people to follow and monitor Jiang Tianyong every day in turn. There are more than a dozen surveillance cameras around Jiang Tianyong’s house, and those entering and leaving his house must register and be checked. As soon as Jiang Tianyong leaves his parents’ house, the person on duty to monitor him will follow him closely and harass him.

ChinaAid has been following and reporting the violation of lawyer Jiang Tianyong’s rights for a long time. We will continue to pay close attention and pray for him as always.