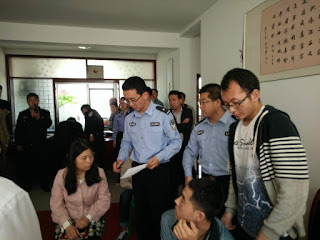 According to information published on the Taihe County government’s official website, officials from all various departments in a local town gathered on Aug. 4 for an event dedicated to forcing 13 so-called “illegal” house churches to align with the agenda of the Communist Party. Ma Pengfei, chairman of the town’s National People’s Congress, detailed how to manage private Christian churches.

A second speaker, local Communist Party committee member Fu Bin, introduced the management methods of combining smaller house churches into larger ones, transforming house churches by forcing them to be monitored by the government, and banning house churches that refused to comply.

Additionally, the rally mentioned tightening controls over three state-run churches in order to “eliminate all potential dangers.” Since the Communist Party insists that Chinese people devote themselves to the ideals of the government, it often views everyday religious activity as a threat to its power. As a result, religious practitioners are routinely persecuted.

On Aug. 7, the government implemented these plans, strengthening its grip on the three government churches and persecuting 13 house churches.

ChinaAid exposes abuses, such as those suffered by church members in Anhui province, in order to stand in solidarity with persecuted Christians and promote religious freedom, human rights, and rule of law.