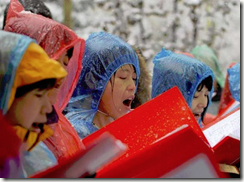 Dear brothers and sisters:
Peace in the Lord! On July 31st, Shouwang had her seventeenth Sunday outdoor worship service. Although each police station held believers in detention for much longer time last Sunday, some even for more than forty-eight hours, many brothers and sisters continue to go out, to seek and worship our God with faith and courage from the Lord.
July 31st, Beijing, sunny, with high temperature. In the past week, many believers were detained at home since Saturday. As far as we know, at least twenty-two believers were taken away on Sunday morning for going to the planned location to join the service (including one brother from a church in an another area). They were then sent to at least twelve local police stations of their respective area. All of each police station employed more force on detention on this Sunday; not until midnight that only some individual believers were released home. Till 01:00am in the next morning, only twelve believers were released home, with ten believers still under detention. Till 12:00pm of August 1st, after more than twenty-four hours, there were still five believers under detention, spending their next twenty-four hours on hard chairs. The last believer, a sister, was not released until 12:30pm of August 2nd. They were required to leave their address so that they can be under policemen’s watch.

Police at some police stations confiscated believers’ cellphones as soon as they were detained, forbidding them to contact people outside. They did not allow believers waiting outside to visit those under detention, and they even refused to deliver water, food and some utensils sent by believers to those detained; some believers thus did not get any food to eat for twelve hours. We believe that our God saw what they experienced and remembered their suffering. It is truly God’s grace that brothers and sisters faced such circumstances with peace and joy. We thank our Lord, for he himself strengthens believers, so that they can continue to be a good witness while in trouble.
By God’s grace, we have had seventeen outdoor worship services so far. It is God’s own protection, support and guidance that enable us to continue to have outdoor worship service for almost four months. God also lifts us up through churches’ prayers. In the past four months, we expressed our uncompromising belief and stand through outdoor worship service on each Sunday, which is, under the premise of worshipping Christ as our only Lord, we live our religious life according to God’s guidance to Shouwang Church.
In this past four months as we had outdoor worship service, we have been looking forward to that day, on which we can be in the place prepared and consecrated by God, come before his seat of grace, and offer him our thanksgiving and worship in unity. We do not know when that day comes, but we believe that God wants us to have such a wonderful hope, and to wait before him with patience and perseverance. We believe that what God has led the church and each believer to go through during this period is not in vain. In the past four months, he broadened our perspectives, allowing us to see a bigger picture in the kingdom of God. May God grant us total commitment to sacrifice ourselves, until his will be done among us.
May peace and grace of the Lord Jesus Christ, the mercy and love of Father God, and the console and guidance of the Holy Spirit, the Advocate, be with each brother and sister of Shouwang Church and all the churches who remember Shouwang Church in prayers, from this time on and forevermore! Amen.
Beijing Shouwang Church
08/02/2011