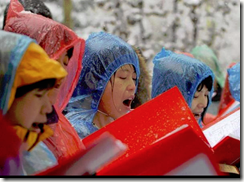 Beijing Shouwang Church
Dear brothers and sisters:
Peace in the Lord! On July 3rd, Shouwang had her thirteenth Sunday outdoor worship service. Although many of us are still facing various kinds of difficulties, brothers and sisters continue to seek and worship our God with gratitude and praise.
July 3rd, Beijing, sunny, with high temperature. Since this past weekend was in a sensitive period of as the Party was celebrating its 90th birthday on July 1st, many believers were under stricter detainment at home. Some individuals were taken to be detained in hotels nearby. Therefore, only a few dozen people managed to arrive at the planned location for outdoor worship on Sunday. Some believers who tried to enter the planned location and some who were nearby were taken away by police waiting there. As far as we know, at least nineteen believers were taken away on Sunday morning (it does not include one believer who was taken to a hotel by local police on Friday night), and then were sent to ten different local police stations. One sister was taken into Huoyin Police Station only because she went to visit believers taken to police stations and waited outside for them. Till midnight of the 3rd, all believers were released except one couple. Till 3:30am of the 4th, the wife was released, but the husband was still detained at Huilongguan Longyuan Police Station. Police talked to him around midnight for many times, trying to persuade him to give up his stand, as he was tired at that time. Beside that, many police stations still force believers to move out from their current living places by pressing their landlords. Around 1:00 am of the 4th, police station chief of Balizhuang authorized the action of pressing the landlord of two sisters who just moved in. The landlord burst into a storm of abuse for two hours, and finally forced these two sisters to move out as some policemen joined him. We strongly condemn this kind of action by police, who is supposed to represent the government to exercise authority, now abused the power to disturb the normal life of citizens who have religious belief. We hope that they can truly serve people, rather than through the means of Mafia, cause the breach of agreement signed between citizens.

We thank our Lord that so many believers still went out and headed to the outdoor worship place with faith and boldness from the Lord on the thirteenth Sunday of outdoor service. Some of them have gone out many times, and some of them entrusted themselves to God with courage and went out for the first time. We have seen God’s work of protection and guidance for Shouwang Church. The long-lasting battle has not demolished God’s church. On the contrary, it helps us to see that the fire of life lighted by God in this church continues to burn, and that no force in this world can extinguish it. For this, we thank our God; he blesses and uses his church in this way.
Many of us have experienced all kinds of difficulties in this battle. Some lost their job, some lost their properties as their belongings were thrown out of their room by others, some were detained at home and were not able to go to work, some encountered verbal abuse, and so on. However, we believe that there are blessings that God determines to grant us in the midst of these difficulties. As we suffer together with the Lord and take the cross together with him, our life is deeply rooted and is growing, so does our church take root and grow in this city and in this country. God’s work is achieved through the cross, and all the disciples who are bearing the cross with the Lord are blessed.
We thank God for granting many believers a willingful heart to suffer for him. No matter how long this journey will take, and no matter what kind of hardship we will face in this journey, we ask God to grant us a heart that is willing to fully sacrifice ourselves for him. We also pray that God will grow us both as individuals and as a church into maturity through trials and difficulties, so that he can use us in great ways to be a blessing to this city and even to this country.
May peace and grace of the Lord Jesus Christ, the mercy and love of Father God, and the console and guidance of the Holy Spirit, the Advocate, be with each brother and sister of Shouwang Church and all the churches who remember Shouwang Church in prayers, from this time on and forevermore! Amen.
Beijing Shouwang Church
07/04/2011