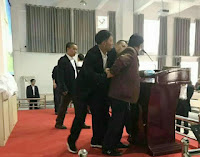 Before Chinese New Year, churches in the area were asked to sing the national anthem at the beginning of their services and the song “No Communist Party, No New China” at the end of the services. Then, a new order forbade anyone from ages one to 18 from entering the church.

During the Chinese New Year, Christian couplets were not allowed to be posted (Editor’s note: Chinese people often post red banners, called couplets, bearing good wishes outside of their doors, and Christians often post faith-related ones). Recently, some officials walked around the neighborhood to request residents smash all ceramic tiles with inscriptions of “Emmanuel” or “God so loved the world” on the outside wall or doors, accusing them of propaganda. If believers did not obey, those officials smashed the tiles themselves. Now, they even enter households to search for Christian paintings inside the house. If residents do not remove the paintings, those officials simply rip them off, including the one in my mother’s bedroom.

Some low-income believers are threatened that their state subsidies will be cancelled if they keep their faith.

Our church choir director is the director of the Women’s Federation. She was told not to attend Sunday services.

Currently, at every Sunday service, several officials will come to conduct the investigations of the crosses. Any cross found to be longer than one kilometer will be taken down. If any child is seen inside the church, the church will be forced to close. At this challenging period, many believers are afraid to come to church. We earnestly ask (Christian) brothers and sisters to remember the churches in the Zhoukou area in your prayers. May God’s mercy and grace be with us.