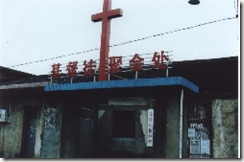 Photo: Yangjianong House church facing imminent destruction by the government
(Midland, Texas (CAA)-November 30, 2006) CAA learned that following the local government’s destruction of the Dalin Church in Shaoxing, Zhejiang, August 21, another house church in the same city also faces demolition. A house church in Yangjianong Village, Qixian Town, Shaoxing County, has received notification from the local government to vacate the church building before December 4, 2006. This would be the 3rd church demolished by the government in Zhejiang Province in the past 4 months, including the Dangshan church in Xiaoshan, July 29, 2006.
The church building, where approximately 200 Christians worship, was originally a workshop, and was bought by the church in 2001. Recently the local government declared that the church be demolished to make room for a park, but refused to arrange a new location for the church.
With the help of the Zhejiang Wulu Law firm, the church submitted an application to the county government for an Administrative Review of the decision, but it was rejected. Then the church entrusted Lawyer Mao Aidong of the Wulu Law Firm as their attorney to file a lawsuit against the county government to prevent the demolition. The case is in progress.
“This is religious persecution typically disguised in recent years as a non-religious case in China.” said Bob Fu, president of CAA, “Under international pressure, the government now intends to choose another governmental department to deal with religious affairs rather than the Religious Affairs Department, but no matter which department, the nature of religious persecution is the same.”
Lawyer Mao Aidong, who is in charge of this case agrees to be interviewed by the media, Contact Number: +86-13505816992
In another church destruction case in Gansu province, CAA learned the local government attitude is progressively changing since October 16, 2006, when 300 Christians gathered and silently protested the government occupation of their original church property – requesting the return of this property.
In the beginning the government held an unyielding stand, insisting that the issue was settled in 1984, when the government offered 50,000 RMB as compensation, which the church never accepted. The Christians did not succumb to intense pressure from the government and persisted with the protest. As the issue gained international attention the government agreed to negotiate with the church leaders on the condition that the Christians evacuate the original church property.
Seeing no sign that the Christians would end their protest, the government requested the church leaders submit a proposal to solve the issue. The church leaders insisted the government return the property, and also show some flexibility with an alternative proposal that the government compensates the church by giving them a near-by abandoned cinema, which is a bit smaller than the original church building, adjacent to the church. The government refused the proposal.
The protest lasted until November 23; the government offered a plot of land in a suburb the same size as the church property. The church leaders are discussing how to respond to the proposal from the government. Though many Christians find it hard to accept such “compensation,” some church leaders are considering accepting it.
“Though the so called compensation is still far from fair,” said Bob Fu, “compared with the original stand of the government, we can say that the Christians have achieved at least a partial victory in this event. Such a compromise can hardly be considered fair but we hope the government and church can settle the issue peacefully.”
Attachment: a brief summary of the document issued by Shaoxing demolition administrative office
Applicant: Shaoxing County municipal investment & development Co. Ltd
Applicatee: Qian Tugen, Han Haimin, Han Shaoliang
In order to build the “Farmer’s Park,” the developer needs to demolish the house (Note: the church building) owned by Qian, Han, and Han (Note: 3 Church leaders).
The house, which was originally a workshop, was transferred to the current owner in 2001, the deal was approved by the government. But the function of the house was changed. (Note: use as a church)
Since the developer and the owner cannot reach any agreement on the remuneration issue, the developer applied for an administrative verdict.
After investigation, the project conducted by the developer is legal, and approved by the government. The owner and the developer could not get an agreement on the remuneration. In order to ensure the legal rights of both sides, we accept the developer’s application, held a hearing on November 14, and held an intermediate meeting November 19, but failed to get any agreements.
We conclude that the project conducted by the developer conforms to the national regulation, and should be supported. Since the house has not been used according to its original usage, it is unnecessary to arrange a new place for the house. According to the “regulations on municipal house demolition and moving of Zhejiang,” we decide:
1.      The developer remunerate the owner financially
2.      The owner evocate from the house and deliver it to the developer within 15 days.
If any party does not accept this decision, you can apply for administrative review to county government within 6 days, or file a lawsuit to county court within 3 months. The demolition would not be stopped by the administrative review or the lawsuit.
Shaoxing demolition administrative office
November 30 2006