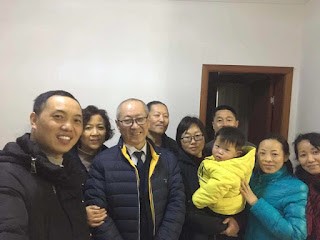 On
November 17, several Christians from Qingcaodi, including Liu Wuyi, Elder Wu
Jiannan, and former deacon Hao Ming, were arrested under the excuse of
suspected “fraud”. This led to a series of arrests and detainments, resulting
in jail time for Wu Jiannan, Hao Ming, and now Li Wuyi.

Liu Wuyi was
in charge of the church’s accounting. Her arrest forces her to
provide evidence for the “fraud” charges against Elder Wu Jiannan and former deacon Hao Ming.

Qingcaodi was an Early Rain Covenant Church’s church plant in
Deyang. They became a separate member of the Western China Reformed Presbytery.
Former elder Hao Ming signed onto Wang Yi’s “Joint Statement: A Declaration for
the Sake of Christian Faith,” in 2018. Three days after the massive crackdown
against Early Rain Covenant Church in Chengdu, police officers raided
Qingcaodi. They broke into the church, expelled the Christians, and posted a
banning notice on the gate issued by the Religious Affairs Bureau and Civil
Affairs Bureau.

Since the
massive crackdown against Early Rain Covenant Church in Chengdu, police
never relaxed their persecution. On November 29, Dongzikou police arrested
Early Rain member Yi Yinxiang, accusing him of “participating in a cult”. He was
released at 2:40 am the next day. Elder Li Yingqiang is also prepared to be
arrested again at any time.