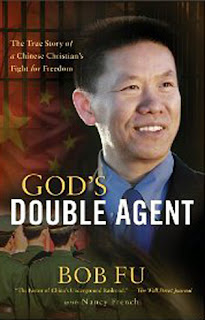 MIDLAND, TX (ANS) — Back in May, 2012, Bob Fu played a critical role in an important human rights case. He testified before a Congressional committee about the fate of the blind Chinese dissident Chen Guangcheng, and arranged for Chen to testify by phone from his hospital room in Beijing.

Blind human rights lawyer Chen Guangcheng, known for his daring night-time escape from Chinese secret police in 2012 and the subsequent international efforts to secure his freedom and move to the United States, testified in person for the first time before Chairman Chris Smith’s (NJ-04) global human rights subcommittee in the U.S. House of Representatives. It was a sharp contrast to Chen’s live call to Smith during a similar hearing on May 3, 2013 from a Chinese government hospital bed in China.

At two congressional hearings chaired by Smith on May 3 and May 15, 2012, Chen testified by telephone and pleaded for the protection of his extended family—especially his mother, brother, and nephew—and friends. Smith also chaired an emergency hearing on Chen in Nov. 2011 at the Congressional-Executive Commission on China, when Chen’s well-being could not be ascertained.

This is just one of the climactic stories in “God’s Double Agent: The True Story of a Chinese Christian’s Fight for Freedom” by China-born Bob Fu (with Nancy French). It is, however, just one chapter in his extraordinary life.

Although television networks and newspapers around the world showed images of Fu holding up his iPhone so the committee could hear, the media could not capture the extent of the behind-the-scenes maneuvers Fu had orchestrated to bring Chen’s plight to light.

Chen is only one of scores of political dissidents and persecuted Christian leaders Fu has helped guide to freedom, and leading major newspapers like The New York Times, The Washington Post and The Wall Street Journal have profiled him. The Journal described Fu as “the pastor of China’s Underground Railroad.”

I recently was able to interview Fu, who explained that while still living in China, he began calling himself “God’s Double Agent” because he taught English during the day in a communist school and led home Bible studies at night in his native China. He is the founder and president of ChinaAid in Midland, Texas and has been compared to Dr. Martin Luther King Jr. for his work for the oppressed in China.

Fu said that he grew up in the remote province of Shandong, and as a university student, he participated in the 1989 pro-democracy demonstrations in Tiananmen Square. But he left Beijing when his girlfriend, Heidi, became ill, avoiding the massacre when Chinese troops opened fire on the demonstrators, inflicting thousands of casualties.

“I was raised in the south east of China as part of a poor family in a very poor village, and at that time in China, if you’re very poor, you’re always bullied by you peers,” he said. “But then in my high school years, I found that if you want to be respected, the best way is to become a government official. I started in my ambition after graduation from high school, and then I wanted to be the first democratically elected prime minister of China.

“I went to college in 1987 and, at the time, I was always going to be in the communist party. That was until 1989, when the students movement started in Beijing and I led the first demonstration for my university and then onto Tiananmen Square. When this happened, the communist party took revenge on me.”
After being a student protest leader, he found himself at the university in Shandong, being ostracized by students and faculty alike. He said that Chinese police forced him to write confessions and treated him like a criminal.

“I felt as though I was being betrayed by my friends who used to support me during the student movement,” he said. “I just could not reconcile myself to what was happening to me during that time, and I was full of despair and hatred and, at one time, I was even planning to commit a suicide bomb campaign. But, fortunately, God really rescued me out of that very critical moment.”

The huge change came about, one day, when someone gave him a book about a Chinese intellectual who converted to Christianity. The story had a profound impact on him and he realized that if China was going to change, people’s hearts would have to change also, including his own.

Fu said that, as he read the book, he was he was “totally convicted” about the hatred he was feeling towards others which had caused him to even want to kill others. He said that he came across the scripture which read, “Therefore, if anyone is in Christ, the new creation has come: The old has gone, the new is here!” 2 Corinthians 5:17 (NIV).

“After reading this, I just turned myself over to Christ, surrendered to God, and became His follower,” he said.

His life changed radically and again caught the attention of the government, who imprisoned Fu and Heidi, by then his wife, for two months in 1996 for their unsanctioned Christian activities with the underground church. In China, only government-approved churches can legally hold religious services.
Shortly after their release, Heidi became pregnant. They feared they would be forced to have an abortion, because they hadn’t sought permission to have a child under China’s repressive population control policies. Much like the blind dissident Chen many years later, they decided to escape.

One night, Heidi left their apartment building in disguise, and Bob jumped out of a second-floor bathroom window. They fled to Thailand, Hong Kong and eventually the U.S. Fu first went to seminary in Philadelphia, starting ChinaAid, a nonprofit organization that advocates for the underground church and political dissidents in China, in his attic, and then settled in 1997 in Midland, Texas, located on the Southern Plains of the state’s western area, because the supporters he met and had helped him during those early days, were from there.

In the intervening years, Fu has helped many people escape from China and learned an important lesson. “If you’ve rescued one soul,” he writes, “it means more than the whole world.”

I then asked Bob Fu why, after settling in the US, where he could enjoy the good life, why he had spent so much of his time fighting on behalf of persecuted Christians and others in China.

“Well, we came here as refugees, and I was being equipped by Westminster Seminary and dreaming of becoming a theologian for China’s future, but every day, when you hear those cries from persecuted brothers and sisters; from the freedom fighters and from the family members being tortured; being hanged; being burnt, I always felt that I should obey the scripture which says, ‘I was in prison, and you visited me.’” (Matthew 25:37).”

Fu also quoted from Hebrews 13:3, which reads, “Remember them that are in bonds, as bound with them; and them which suffer adversity, as being yourselves also in the body.” (King James Bible).

“So, after reading these verses, how could I not do that in a free country?” he went on to say. “Here in America, we can speak up and have freedom of expression. We can be a voice for those voiceless brothers and sisters. So that’s how I came to start ChinaAid and since then, we have been a leading voice in exposing these abuses in China, and encouraging the abused and equipping leaders of the persecuted church there.”

I then asked Bob Fu if he had any idea how many underground Christian believers there are in China, and he replied, “China is still censoring the information, but it has been estimated anywhere from 40 million to 80 million members of the underground church. It’s hard to tell an exact number, but these are those who worship in the house churches. And the government-sanctioned church has about 20 to 30 million people in them.

Fu also stated that many of the house church [underground] believers are well-educated, often top students, and he added, “That’s God’s way of reviving His church which no government, no authority, can suppress His Holy Spirit. Only He can do this miracle.”

I asked Bob Fu what the Chinese government thought about his activities, and he said, “At least they know that I’m not fabricating anything. They’re not happy with me because they say, ‘Bob Fu only reports ugly news’. My answer is that their ‘good news’ is already reported by their Xinhua News Agency. The government has its own mouth piece, their own newspaper, and they are even doing that in the United States.”

I wondered if he felt it was dangerous for him to be a voice for the persecuted in China, and he admitted that it was.

“It is dangerous,” he said. “My family members have been harassed and in my book I wrote about how my father was beaten up and I had to rescue him after he fled out of China to Thailand. That was a rescue story like the double 07 in my book ‘God’s Double Agent’. Yes, my family members, my relatives and even classmates, are being harassed all the time.

“But God gave me this mission, and many times, I have felt very desperate, but seeing that my three children were able to sleep quietly in this country without fear, how could I keep quiet knowing my brothers and sisters and fellow freedom fighters are risking their lives for freedom?”

The book has received many endorsements, including the following:

Bob Fu has dedicated his life to bringing freedom of religion to the Chinese people. His story is a testimony to the power of faith and an inspiration to people struggling to break free from oppression.”–Mrs. Laura Bush

“The riveting account of a student leader of the Tiananmen Square protests who becomes a literal prisoner for Christ and then escapes to the West. Impossible to put down.”–Eric Metaxas, New York Times bestselling author of Bonhoeffer: Pastor, Martyr, Prophet, Spy and Amazing Grace: William Wilberforce and the Heroic Campaign to End Slavery.

“Like John the Baptist, Bob Fu has influenced people from all walks of life, across the nation of China and beyond, and led many to repent and believe in Jesus. Anyone who cares about the persecution of God’s household in China and in the Middle East should read this book.”–Brother Yun, Chinese house church leader and author of The Heavenly Man.

“This compelling and deeply moving account of Bob Fu’s escape from China and his heroic work on behalf of other human rights workers there is likely to become a classic. From the very first page, you are hooked. There are few more convincing narratives of Christian courage under persecution and suffering.”–David Aikman, former senior correspondent for Time magazine; author of One Nation Without God?

So if that has whetted your appetite to find out more about “God’s Double Agent,” visitwww.bakerpublishinggroup.com/books/god-s-double-agent/345520

I would like to thank Robin Frost for transcribing this interview.

Dan Wooding, 73, is an award-winning journalist who who was born in Nigeria of British missionary parents, now living in Southern California with his wife Norma, to whom he has been married for 50 years. They have two sons, Andrew and Peter, and six grandchildren who all live in the UK. He is the founder and international director of ASSIST (Aid to Special Saints in Strategic Times) and the ASSIST News Service (ANS) and he hosts the weekly “Front Page Radio” show on the KWVE Radio Network in Southern California and which is also carried throughout the United States and around the world. He is the author of some 45 books, the latest of which is a novel about the life of Jesus through the eyes of his mother called “Mary: My Story from Bethlehem to Calvary”. (Click to order)