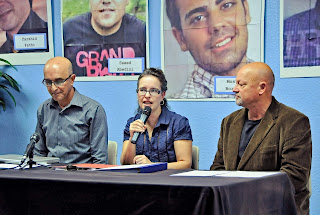 AP: Calif. pastor to be sent home after Iran protest

The Associated Press published an article with updated information on the situation surrounding Eddie Romero and his recent protest in Iran. The article, which contained information from the San Gabriel Valley Tribune, stated the Romero contacted his wife from the Swiss Embassy in Tehran and said he will be sent back to the U.S. in the next few days. The full report can be read below:
Calif. pastor to be sent home after Iran protest
Raquel Maria Dillon
Published: Today

LA PUENTE, Calif. (AP) – An activist preacher detained in Iran after staging a protest outside a prison will be sent back to the United States, a fellow Southern California pastor said Tuesday.

Romero said he would be put on a plane home in the next few days. He said he’d prefer to stay in Iran to continue to bring attention to the detention of Iranian Christians at Tehran’s Evin Prison.

The U.S. State Department had only brief comment on the matter.

“We are aware of the reports that a U.S. citizen has been detained in Iran and, due to privacy consideration, have no further comments or details this time,” spokeswoman Marie Harf said in Washington, D.C.

Romero, founder of the organization Exodus8one, surrendered to guards who brought him inside the prison for questioning, according to an account by his daughter.

He had crossed into Iran from Turkey Oct. 14 as part of a tourist group, the San Gabriel Valley Tribune reported (http://bit.ly/1cRfjRp ).

Romero broke away from the group last Thursday and reappeared Monday at the prison, chanting “Let my people go,” his daughter, Sarah Yetter, told the newspaper.

He broadcast about six minutes of his protest and eventual detention on the Internet using a smartphone hidden in his pocket, Yetter said.

“He was heard being questioned about where he was from by someone in English, and he was heard repeating his appeal for the prisoners seven more times,” Yetter said.

Guards could be heard making plans to bring in an English translator, shortly before the phone cut off shortly after 11 p.m. local time, she said.

Shahrokh Afshar, a pastor for The Iranian Church On The Way in the Van Nuys area of Los Angeles, said the guards sounded confused in the recording but remained respectful.

“They weren’t sure if he was there protesting or if he wanted to visit someone,” Afshar said.

Romero hopes to raise awareness about Christian prisoners Farshid Fathi, Saeed Abedini, Mostafa Bordbar and Alireza Seyyedian. All were imprisoned because of their faith, Afshar said.

“Their greatest sin was leaving Islam to follow Christ,” he said.

Abedini has been detained since September 2012. The U.S. government has previously called for the release of Abedini and two other Americans who have been subjected to lengthy detentions.

In 2008, Romero was arrested in China during the Beijing Olympics after demanding the release of five Chinese activists. In Beijing, Romero painted on the walls of a hotel room and then went on the run for 21 days before surrendering in Tiananmen Square. Chinese authorities held Romero for approximately 24 hours before putting him on a flight home, Yetter said.

Romero retired as a pastor from Hacienda Christian Fellowship in La Puente, Calif., in July. He founded Exodus8one in 2008 and is currently a world religion and philosophy professor at Mount San Antonio College in Walnut, Calif.