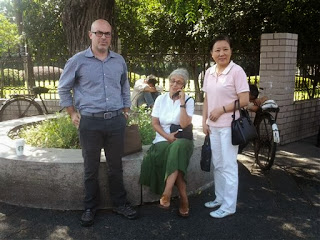 (Beijing—Oct. 12, 2013) The Associated Press reported that a doctor and a human rights advocate, both U.S. citizens, were denied a medical visit to a Chinese dissident and were briefly held inside the eastern Chinese prison.

Dr. Devra Marcus and Kody Kness, a human rights activist, traveled to China so that Marcus could examine Zhu Yufu, a member of the China 16 who was imprisoned after writing a poem that authorities claimed incited subversion. The full story by the Associated Press can be read below.

BEIJING (AP) — A physician and a human rights advocate, both Americans, said they were denied a medical visit to an ailing Chinese democracy activist in a jail in eastern China on Saturday and held briefly inside the prison.

Dr. Devra Marcus and human rights advocate Kody Kness, both from the Washington, D.C., area, were trying to make a humanitarian visit to Zhu Yufu, who is serving a seven-year sentence on a conviction of inciting subversion and is believed to be in poor health in the prison in Zhejiang province.

Kness said their request for a visit was denied on the ground that they are foreigners and that he and Marcus were held after he used his cellphone to take a photo outside the office of a prison functionary they had been dealing with. Kness said he wanted to photograph the office plaque to keep as a record because the functionary had refused to identify himself. But the photo-taking act apparently upset the functionary, who became furious and took away Kness’ cellphone, Kness said.

“He was unapproachable, and we were apologetic,” Kness said.

Marcus and Kness have traveled to China on tourist visas and had hoped they could visit Zhu in prison. “I think the main goal is to call attention to his situation,” said Marcus, who became concerned about Zhu after hearing reports of his ill health. “We want to indicate there are people in the United States who are interested in his well-being.”