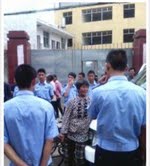 On Aug. 31, local government in Xiaomiao village, Xichang city, Sichuan Province sent over 300 police officers to arrest an Army veteran, Sun Xianfa, who was resisting forced demolition. Over the course of the incident, more than 10 villagers were arrested and many more were beaten. Sun’s daughter-in-law was injured while holding her one-year-old child. The child, as one would expect, was frightened by the commotion.

A ChinaAid source reported that both Sun and his son served in China’s army. Sun’s son is currently serving while Sun was recruited in 1973. Sun served as a sergeant in the self-defensive counterattack against Vietnam in 1979. After leaving the army, Sun worked as a village leader in Xichang city for nine years.

ChinaAid notes the irony that a family with two generations of servicemen was allowed to defend their country, but not their home. Please pray for the Sun family, especially for Xianfa as he is still in police custody.
China Aid Contacts
Rachel Ritchie, English Media Director
Cell: (432) 553-1080 | Office: 1+ (888) 889-7757 | Other: (432) 689-6985
Email: [email protected]
Website: www.chinaaid.org
Prev
Next