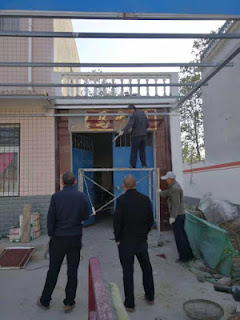 (Zhengzhou, Henan—Nov. 28, 2018) Churches in China’s central Henan province face increasing pressure as local authorities order them to remove signs of their faith and raid the homes of Christians.


According to Christians in Nanyang, Henan, officials commanded all cadres in towns and villages to be fully operational before 10:00 a.m. on Nov. 23 and remove all Christian couplets, signs, and symbols from churches in order to meet the inspection of higher-level government departments.

In Daheyu Town, which is located in Tanghe County, Henan, Christian homes have come under attack. Some church attendees said, “The streets … are very active today. They mobilized all the urban management personnel, village officials, and team leaders to enter Christian homes and conduct forced removal.” They did not specify what was being removed.

Additionally, a Henan pastor who chose to remain anonymous said that in his city, no crosses can be seen, and all churches have been closed down and sealed. Some Christians attend churches that are state-run and censored, but most of them choose to stay home. The pastor also reported that some pastors have left Henan because of the authorities’ frequent interrogations and requests that their congregations join the government churches.

ChinaAid exposes abuses, such as those suffered by Christians in Henan, in order to stand in solidarity with the persecuted and promote human rights, religious freedom, and rule of law.