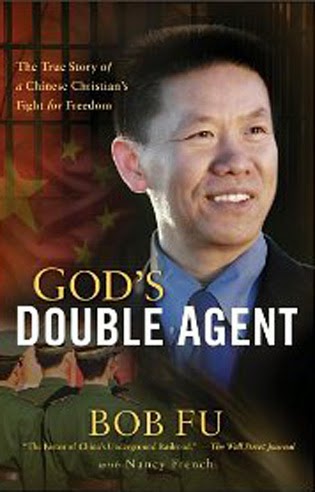 Bob Fu’s “story is a testimony to the power of faith and an inspiration to people struggling to break free from oppression.” (Former First Lady Laura Bush).

DALLAS (ANS) — About a year ago, Bob Fu played a critical role in an important human rights case. He testified before a Congressional committee about the fate of the blind Chinese dissident Chen Guangcheng, and arranged for Chen to testify by phone from his hospital room in Beijing.

According to a news release made available to the ASSIST News Service, the event is one of the climactic stories in “God’s Double Agent: The True Story of a Chinese Christian’s Fight for Freedom” by Fu with Nancy French. It is, however, just one chapter in an extraordinary life.

Although television networks and newspapers around the world showed images of Fu holding up his iPhone so the committee could hear, the media could not capture the extent of the behind-the-scenes maneuvers Fu had orchestrated to bring Chen’s plight to light.

The news release said Chen is only one of scores of political dissidents and persecuted Christian leaders Fu has helped guide to freedom, leading major newspapers like The New York Times, The Washington Post and the Wall Street Journal to profile him. The Journal described Fu as “the pastor of China’s Underground Railroad.”

Fu, who began calling himself “God’s Double Agent” because he taught English during the day in a communist school and led home Bible studies at night in his native China, is the founder and president of an organization called ChinaAid in Midland, Texas. He has been compared to Dr. Martin Luther King Jr. for his work for the oppressed in China.

Now “God’s Double Agent” tells Fu’s story. He grew up in the remote province of Shandong. As a university student, he participated in the pro-democracy demonstrations in Tiananmen Square in 1989. But he left Beijing when his girlfriend, Heidi, became ill, avoiding the massacre when Chinese troops opened fire on the demonstrators, inflicting thousands of casualties.

Back at university in Shandong, the news release said, he found himself ostracized by students and faculty. Chinese police forced him to write confessions and treated him like a criminal.

Then one day, someone gave him a book about a Chinese intellectual who converted to Christianity. The story had a profound impact on Fu and he realized that if China was going to change, people’s hearts would have to change, including his own.

The government imprisoned Fu and Heidi, by then his wife, for two months in 1996 for their unsanctioned Christian activities with the underground church. In China, only government-approved churches can legally hold religious services.

Shortly after their release, Heidi became pregnant. They feared they would be forced to have an abortion, because they hadn’t sought permission to have a child under China’s repressive population control policies. Much like the blind dissident Chen many years later, they decided to escape.

One night, Heidi left their apartment building in disguise, and Bob jumped out of a second-floor bathroom window. They fled to Thailand, Hong Kong and eventually the U.S. Fu first went to seminary in Philadelphia, starting ChinaAid in his attic, and then settled in Midland because of the supporters he met from there.

ChinaAid is a nonprofit organization that advocates for the underground church and political dissidents in China.

In the intervening years, the news release said, Fu has helped many people escape from China and learned an important lesson. “If you’ve rescued one soul,” he writes, “it means more than the whole world.”