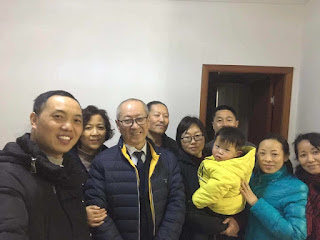 (Deyang, Sichuan Province—January 26, 2022) Cui Yanqin, the wife of Elder Wu Jiannan of Early Rain Qingcaodi (Qingcaodi), sent out an open prayer request on January 22, disclosing that authorities transferred Wu Jianan to Deyang Detention Center over 20 days ago.  Elder Wu’s defense lawyer visited the detention center in that time frame and requested to visit his client in accordance with the law. Authorities rejected him. The detention center let him look at the official document issued by the unit handling the case. According to the document, he was not allowed to visit his client because the case may pertain to “national security and national secrets”.

Elder Wu’s attorney went to Chengdu from Deyang and visited the relevant units there, telling them that his client’s charge is “fraud,” so it was unnecessary to get permission to visit his client. The unit handling the case gave a random explanation and applied the visiting permission to the case. The attorney requested to see Wu Jiannan again. The relevant unit asked the attorney to wait for their response.

In her prayer request, Cui Yanqin asked believers to intercede for Elders Wu Jiannan and Hao Ming, and she hoped that the unit handling the case would allow attorneys to visit them soon and asked God to watch over them while they are in the detention center.