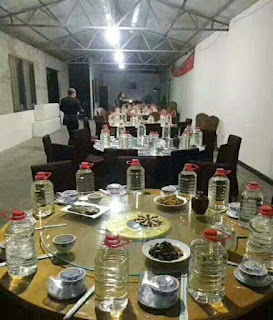 (Midland, Texas—Dec. 26, 2017) Across China, authorities employed measures to snuff out Christmas this week.

In Heshan, Guangdong, authorities launched an unprecedented attack against a government-run church when they installed surveillance cameras to monitor its Christmas festivities. A Christian surnamed Zheng said, “For many years, Three-Self Churches were never monitored for celebrating Christmas, but this time the cameras were installed, and many believers were shocked.”

Guangfu Church, a house church located in Guangdong’s capital city, Guangzhou, moved into a new church building today after suffering repeated persecution. One of their former pastors said on Saturday, “We found a new place and will move on Dec. 26, after Christmas. Yesterday, a public security agent called me and asked how we celebrated Christmas and how many people would attend, saying we must report to him. I also heard news from other places that [persecution] is much more severe this year, especially recently, in Henan.”

According to a notice published by the Anqing Municipal Public Security Bureau in Anhui province, “All special and public places are not allowed to celebrate Christmas. Even creating a Christmas atmosphere—such as putting up Christmas trees, Santa Claus, wearing Christmas hats, and all other items related to Christmas—is severely restricted, and all Christmas-related activities are required to be cancelled.”

Government personnel in Zhejiang province restricted Christmas via a variety of oppressive measures. Groups of seniors suspected to be hired by officials marched the streets of the province, chanting “Boycott Christmas” and “No Christmas.” In a shopping mall, passersby crowded around as more than a dozen technicians tore down a Christmas tree, and tables prepared by a church for Christmas celebrations remained empty in Hangzhou after authorities warned Christians not to attend the event. Similarly, a pastor in Wenzhou reported that officials prevented local Christians from attending Christmas parties, but some church members in a few areas were able to attend.

Additionally, house churches in Jilin and Anhui have been prohibited from holding Christmas celebrations. One Christian in Tonghua, Jilin, said, “The [church] gatherings in this place, especially the house churches, are not allowed, and no more than eight people can even attend separate parties. All are scattered and secretly get together.”

News of the oppression is also being suppressed, with authorities policing postings about the situation online.

ChinaAid exposes abuses, such as those suffered by Christians during Christmas, in order to stand in solidarity with persecuted Christians and promote religious freedom, human rights, and rule of law.