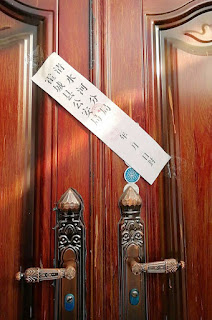 (Yining, Xinjiang—Jan. 12, 2018) Authorities in China’s northwestern Xinjiang banned and sealed a church on Dec. 31, leaving more than 100 Christians without a gathering place less than a week after their pastor had been questioned for 10 hours.

To the surprise of its members, Qingshuihe Church in Yining, Xinjiang, was sealed and banned on Dec. 31 after officials failed to follow through on previous threats to close the church. Government personnel prohibited anyone save for Communist Party agents from entering, saying the more than 100 Christian who met there held religious activities at an unregistered venue and forcing them to meet in private residences. Lou Yuanqi, the church’s pastor, said he plans to negotiate with the authorities in hopes of getting their church building back.

On Christmas, the local public security and religious affairs bureaus raided Lou’s house and took him to the police station. They questioned him for 10 hours, accusing the church of meeting on Christmas Eve and saying they had been informed that there were too many people at the church. Eventually, they released him at 10 p.m. that night.

For years, police have restricted Lou’s travel, even making him sign a letter forswearing travel outside of the local area in mid-February.

The church, however, has persevered through official persecution before due to meeting in an unregistered church, which are the only Chinese churches not censored by the government. In the past, they have been subjected to police raids and demands to cease all religious activities in their church building.

ChinaAid exposes abuses, such as those suffered by Lou and the members of Qingshuihe Church, in order to stand in solidarity with persecuted Christians and promote religious freedom, human rights, and rule of law.