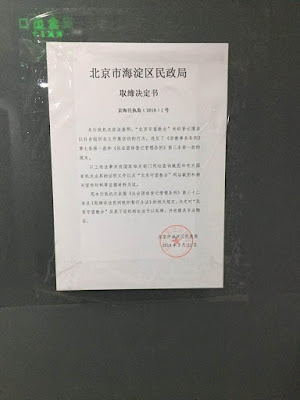 (Beijing—March 28, 2019) Beijing authorities continue to suppress Shouwang Church, closing its branches since banning it on Saturday and confiscating their supplies.

One meeting place, located in the Changyuan Tiandi Building in Beijing’s Haidian District, was closed down. According to a ban notice from the Haidian District Ethnic and Religious Overseas Chinese Affairs Office, its pastor, Zhang Xiaofeng, had conducted religious activities there. The notice also cited a cross hanging on one of the interior walls, a podium placed within the venue, a prayer request box, numerous folding chairs, a piano, Bibles, hymnals, microphones, and sound equipment, concluding that “It is an illegal place to conduct religious activities.”

Officials from the ethnic and religious affairs bureau claimed they have on-site inspection and inquiry transcripts and photos that prove the church established the venue without the approval of the government, a step necessary for a church to operate legally in China. As a result, the church was banned, and the authorities gave them the option to appeal within 60 days.

A Christian with knowledge of the situation said the church plans to protect their rights through legal means, saying, “The [Chinese] Constitution stipulates that citizens have the right to religious belief. This action by the government department’s personnel is totally inconsistent with the spirit of the Constitution. It’s way beyond boundaries for the government to take this action … The church is considering hiring lawyers.”

Shouwang Church has been under constant harassment from the government since 2008. For a timeline of the persecution experienced by the church, please click here.

On Saturday, the Chinese government formally banned the entire church, including its many branches, and confiscated its property, claiming it had carried out religious activities without registering with the government. However, the church had attempted to register in 2006 but was rejected on the grounds that its pastor, Jin Tianming, had not undergone government training as a clergy member.

Jin has been under continuous house arrest for more than seven years. As the officials renew their crackdown on Shouwang Church, his situation has gotten much more restrictive, and he cannot even leave his home to go to the downstairs portion of his apartment complex.

On March 23 and 24, students attending Shouwang Church’s Bible classes were investigated by a large number of government agents from various religious departments. The church’s group on the social media platform WeChat has also been banned.

A ChinaAid reporter attempted to log onto the church’s website on Sunday, but it was not accessible.

The full English translation of the notice sent on Saturday can be viewed below.

This administrative organ has carried out a legal investigation and found out that “Beijing Shouwang Church” did not register but organized events under the name of a social association without authorization, so it has violated Article 7, Clause 1 of the Regulations of Religious Affairs and Article 3, Clause 1 Regulations for the Registration and Management of Social Organizations.

Per Article 32 of the Regulations for Registration and Management of Social Organizations and the Interim Measures for Banning Illegal Non-governmental Organizations, it is decided that “Beijing Shouwang Church” and its subsidiary organizations should be shut down and its illegal possessions confiscated.

Haidian District Civil Affairs Bureau of Beijing Municipality
March 23, 2019
ChinaAid exposes abuses in order to stand in solidarity with the persecuted and promote religious freedom, human rights, and rule of law. If you wish to partner with us in helping those persecuted by the Chinese government for their beliefs, please click the button below to make a charitable donation.