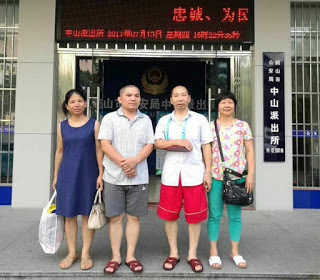 (Heshan, Guangdong—March 24, 2020) A Christian is struggling to support his family as the government interferes with his job prospects.

Ruan Haonan, who attends a group related to Fengle Church, was taken into custody in 2017 because of his faith. Since being released, he has faced consistent persecution. The authorities have repeatedly pressured his employers to fire him, leaving him constantly out of work.

He said, “I have been having a hard time finding a job since our church was harassed by the public security department in 2017. Every year, the local police station calls us to question us, berates us, and asks me not to preach the Gospel. Hotels and restaurants generally reject me if I look for positions there, saying that I have a criminal record. I have to work for eateries, and the salary is 30% lower than big restaurants, so it is hard to raise a family.”

He also says that police have labeled him as having joined a cult, making potential employers who perform background checks not want to hire him.

His situation worsened once COVID-19 hit China and the government closed down eateries. Now, he is helping friends sell used cars, but it isn’t making him nearly enough money to support himself, his wife, two children, and grandmother.