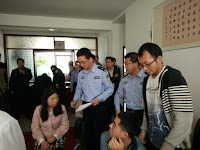 According to Kong Lingrong, a Christian woman who hosts a house church in her home, government agents are constantly stationed at her door and prevent other Christians from visiting. Additionally, a white vehicle has been stationed outside her apartment complex. Whenever she leaves, government personnel follow her.

As 21 Christians met in her home for a church service on Feb. 19, officials broke in and announced that all religious gatherings with more than three people were illegal. After Kong asked questions, they dragged her to the police station along with several others, and one officer asked for permission to beat the churchgoers.

Kong also reported that she was given a document detailing 26 commonalities of so-called “illegal gatherings,” which included, “Holding organized religious activities outside of designated religious buildings without government permission; clergy and believers worshipping, gathering, or giving sermons outside of designated religious buildings” and “Inviting clergy from other cities without government permission.” However, the document lacked a title and an official seal, leading her to speculate that the government contrived these regulations.

Just after Kong’s home was raided, officials arrived at the nearby apartment of another Christian, Mei Yunhua, who also uses her residence for church services. At the time, the place was empty. Officials cut off her electricity and water supply for five days, only restoring it after the case garnered international media attention.

In an interview, Mei said, “Everyday, they watch [the church members], surveilling our homes, including the homes of our [Christian] sisters. As soon as you leave your house, they follow you … They don’t obviously watch you, but rather observe you from a secret place. One of our [Christian] sisters went to a prayer meeting one night, and, when she came out of it, [an official] car suddenly started following her. She was tailed all the way home.”

Kong defended the legality of private Christian gatherings, saying that the law grants Chinese citizens freedom of religion. Her claim agrees with Article 36 of the Constitution of the People’s Republic of China, which states:

China Aid reports abuses such as those experienced by Kong and Mei’s churches in order to stand in solidarity with persecuted Christians and promote religious freedom, human rights, and rule of law.