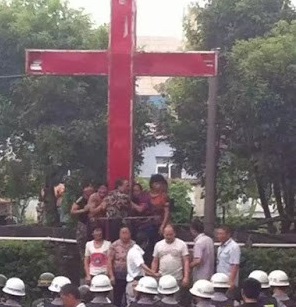 (Zhengzhou, Henan—Sept. 26, 2018) More than 1000 government agents raided an unregistered church in China’s central Henan province on the morning of Sept. 14, breaking locks and looting its possessions.

One church member said, “A large crowd of policemen, including SWAT officers, suddenly came to Zhongxing Church around 7:00 a.m.” Officers blocked off the streets leading to the church, and, even though the Christians had locked the doors from the inside, the officials still broke past them. They ignored the church leaders’ request to show identification and plundered the church.

This is part of a larger crackdown on churches nationwide following the installation of China’s revised Regulations on Religious Affairs. In an attempt to bring religion under complete state control, officials have overseen the demolition of crosses, the destruction of churches, and the arrests of Christians, including pastors Zhang Yinan, Wei Jindang, and Yang Liupei.

The oppression, however, is not limited to Henan. The landlord of another unregistered church in Langfang, Hebei, caved to pressure from authorities on Sept. 10 and required the church to relocate.

Also located in Langfang, the Guangyang District Ethnic and Religious Affairs Bureau, notified the owner of a bank, that his property, which had been rented to church leader Song Quanlin, was being used as an “illegal” venue for Christian events.

Additionally, schools located in Wenzhou, Zhejiang, asked students to complete a form about their religious beliefs after summer break. According to reports, only one of the 200 Christian students at one of the institutions, Pingyang No. 2 Middle School, acknowledged his faith after teachers intimidated them while filling out the form.

In similar incidences, children have been kept from receiving further education if they or their parents choose not to renounce their beliefs.

Afterwards, the student called his teacher, crying for 20 minutes and saying, “I can’t deny the Lord.”

Another Christian, Zhang Shiqun, was arrested by police while attending a non-government-run church in Guizhou province on Aug. 19. The region’s village committee issued a notice stating that he was taken into custody because he didn’t comply with the authorities demands not to attend an unofficial church.