(Ulanqab, Inner Mongolia—Jan. 22, 2012) A Christian students fellowship group in Inner Mongolia that was banned by Chinese authorities last year has filed an administrative lawsuit after its appeal of the government action was rejected, ChinaAid has learned.

As previously reported by China Aid Association, the local police and the Bureau of Minority and Religious Affairs of Ulanqab’s Jining district on Sept. 15, 2011 banned the Mengfu (Blessed) Fellowship for engaging in “illegal evangelism.” The authorities also confiscated 2,110 yuan (US$331) from the offering collection box, an Acer notebook computer, two projectors, a camera, a stereo system, and 17 video tapes.

On Sept. 17, the authorities also put the group’s leader, Liang Guangzhong, into administrative detention for 15 days for “fraudulent use of the name of religion to harm society.” See https://chinaaid.org/2011/10/authorities-ban-christian-student.html

On Oct. 20, 2011, in accordance with China’s “Administrative Review Law” and the “Regulations on Religious Affairs,” Liang filed an appeal with the Jining District People’s Government of the city of Ulanqab, arguing that the banning order was an illegal and invalid administrative act that violated Article 36 of the Chinese constitution, Article 2 of the State Council’s “Regulations on Religious Affairs, as well as Article 18 of the Universal Declaration of Human Rights and Article 18 of the “International Covenant on Civil and Political Rights” to both of which China is a signatory.

On Jan. 18, 2012, the Jining District People’s Government of the city of Ulanqab issued its “Decision on Administrative Review,” upholding the police and religious affairs bureau’s ban. It mentioned specifically that officers from the Hushan police station and Domestic Security Protection agents had discovered that Liang, through the Mengfu Bookstore, had “without permission engaged in evangelism, signing up new members and holding Bible meetings among students at the Jining Teachers College, vocational school, medical college, the high school affiliated with Beijing Normal University, and the Nos. 1, 4 & 5 high schools as well as the Mongolian High School. These activities seriously affected the students’ normal classroom order.” The decision also said that “the Mengfu Fellowship had not been approved nor had it applied for approval.” Therefore, “the facts of Liang Guangzhong’s illegal activities are established and there is sufficient evidence.”

(See scans below of the government’s review decision – click on photo to enlarge.)

Unwilling to accept this decision, Liang has filed a lawsuit in the Jining district court in accordance with Articles 11 and 25 of China’s “Administrative Procedure Law.”

ChinaAid is closely following this case of church persecution and urges the Ulanqab authorities to nullify this illegal ban and to guarantee freedom of religion. 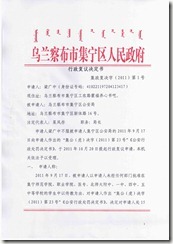 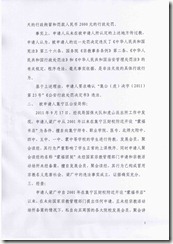 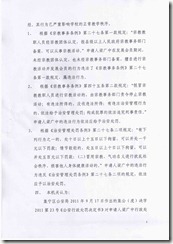 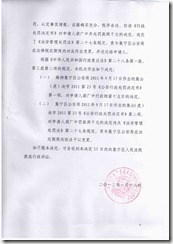