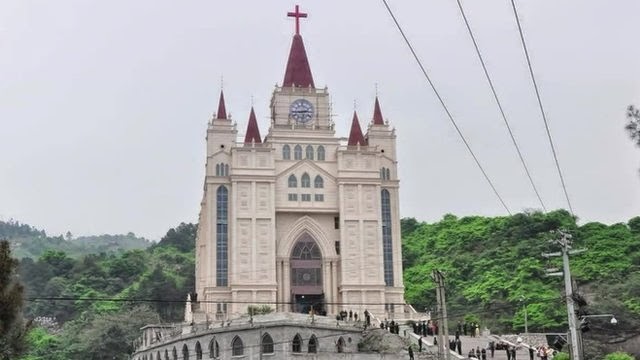 Wenzhou people are as competitive on Sunday as every other day of the week.

This city on the south-east coast is famous in China as a hardworking hive of capitalism.

But it is also home to perhaps a million Christians. Many of them are private entrepreneurs who’ve grown rich turning Wenzhou from a fishing port into a global manufacturing hub.

Comfortable to compete in the marketplace, they take the same spirit to church-building, each congregation challenging its neighbour to build bigger and better.

It is this exuberance which has brought them into conflict with the communist authorities.

In most other Chinese cities the dominant buildings belong to the Communist Party, but in Wenzhou it’s the churches which command attention; many of them as big as cathedrals, adorned with extravagant domes, turrets and spires and each topped by a red cross etched against the encircling mountains.

Until last week, the latest addition on the Christian skyline was the new Sanjiang church. Between river and mountain, in an area of orchards mixed with light industry, the congregation had spent more than 12 years, and $4m (£2.4m; 2.9m euros) of their own savings, to build a space for 3,000 worshippers.

But in March, the government suddenly announced that the building broke planning rules.

The church leaders launched frantic last minute attempts to negotiate and the faithful mounted a round-the-clock vigil in the church grounds.

But clearly someone had made up their mind that a message needed to be sent to Wenzhou’s Christians. Last Monday, police sealed off the area and the bulldozers moved in.

When I visited on Sunday the police cordon was still in place and behind it a huge pile of rubble was all that was left of Sanjiang church.

The old church is a dingy hall down a narrow alley. This is where they will have to stay.

When I joined the congregation for Sunday service, it was a sombre occasion. A dozen of them are now in detention and the rest were nervous about speaking.

Many of the congregation seemed to be in shock. One speechless old man could only mime tears running down his face.

They are still uncomprehending, saying that until recently they had good relations with the local government and for 12 years planners had made no objection to the scale of their building project.

Some government officials even encouraged them to proselytise, observing that Wenzhou Christians make good citizens because they abide by the law and pay their taxes.

The root of their misfortune, they believe, is a disconnect between local and provincial government. They say provincial party officials visited Wenzhou recently and were affronted to find Christian crosses so prominently displayed.

Appeal of Christianity
The Party has certainly long had a conflicted attitude towards religious faith.

While the constitution guarantees freedom of religion, deep in the party’s narrative is a view of Christianity as a tool of Western imperialism, and even recently a government directive warned university campuses to be on their guard against the use of religion to infiltrate, Westernise and divide China.

It must also be galling for communist officials to observe the appeal of Christianity to young Chinese.

Many Chinese of all ages talk about a spiritual crisis and a loss of trust in society. All religious faiths are growing and, with its own ideological certainties long dead, the state has only the slogan of the Chinese Dream to compete.

Interestingly, the Wenzhou Christians saw another rivalry at play.

They said that despite being nominally atheist, the official who had ordered the destruction of their church was actually a Buddhist, and envious of Christian success.

When I wondered how that might square with his atheism, one said: “The more senior officials are, the more superstitious they become.”

I spent Sunday visiting three Wenzhou churches and heard similar stories at all of them. It’s hard to generalise, but it does seem that China’s city of churches is being brought to heel.