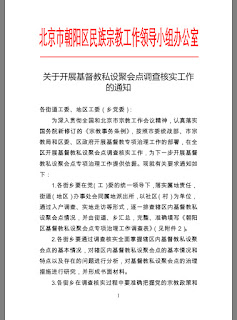 A Christian surnamed Wang said the religious affairs department in Nanyang, Henan province launched an operation investigating and banning Christian churches that are not registered with the government. Another Christian posted a notice regarding the operation online, but the network administrator deleted the post soon afterwards. However, 31 churches that gather in the industrial zone of Nanyang’s Yahegong region were forcibly closed, with officials citing orders “orders from above.” They refused to specify which government department.

Likewise, in Shangqiu, Henan, officials arrived at a house church at 2 p.m. and threatened to demolish its cross and sign. One of the officers said he had “received a call from the police station” and was operating under police command. An anonymous Christian said, “The [Christian] brothers and sisters stopped them, but they will send more people in the next few days.”

Such crackdowns are not limited to Henan, however. In Beijing’s Chaoyang District, a government ethnic and religious affairs group, published the “Notice of Launching an Investigation of Private Christian Gathering Places.” The notice demands that all government-related street work and district committees and their subordinates to carry out the Religious Affairs Regulations and arrange specialized initiatives in various government departments in preparation to manage house churches. It also orders that the street and township committees should partner under the leadership of the Party to assign regional tasks and visit house churches. Then, the churches should fill out the “Questionnaire on the Specialized Management of Private Christian Gathering Places in Chaoyang District,” allowing the local government to analyze the characteristics of the churches, identify alleged problems, and come up with measures accordingly. Local officials are then asked to submit their findings before 4 p.m. on March 30.

The notice also stresses the importance of the committees promote a positive image of the government and guide the public’s opinions of the government, including avoiding the use of violent measures that would give Christians cause to retaliate.

ChinaAid exposes abuses, such as those suffered by churches in Henan and Beijing, in order to stand in solidarity with persecuted Christians and promote religious freedom, human rights, and rule of law.