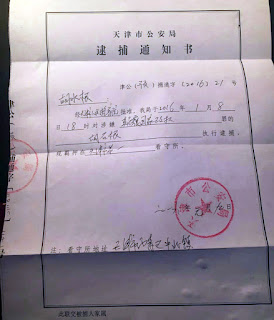 (Tianjin, China—Jan. 14, 2016) China Aid learned today that authorities in China’s northern Tianjin Municipality formally arrested a Beijing church elder and democracy activist for “subversion of state power” on Jan. 8, according to an arrest notice received by the man’s family members.

Hu Shigen, an elder of Yahebo Church in Beijing and long-time democracy activist, was detained on July 10 in connection with the nation-wide crackdown on legal professionals. Hu Shigen has faced trouble with the government for his pro-democracy actions for more than 20 years, during which time he served 16 years of a 20-year prison sentence. Hu Shigen’s brother, Hu Shuigen, supplied China Aid with a photo of Hu Shigen’s arrest notice, below.

China Aid reports on cases like Hu Shigen’s and others like him in order to expose the Chinese government’s abuses against its citizens and promote rule of law in China.

After undergoing the Tianjin Municipal People’s Procuratorate’s approval, our bureau carried out the arrest of Hu Shigen, who is suspected of subversion of state power, on Jan. 8, 2016 at 6:00 p.m. He is currently detained at Tianjin Municipal Detention Center Number 1.