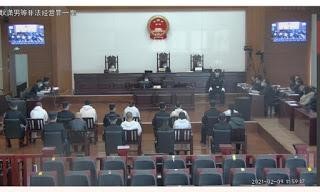 (Beijing, Hebei Province—Feb. 11, 2021) On February 9, the Haidian District People’s Court in Beijing sentenced publisher Geng Xiaonan to serve three years in prison and Qin Zhen, her husband, to serve two years and six months, (suspended for three years)— for “illegal business activities,“ During the trial, the procurator identified Ms. Geng and Mr. Qin as the publishing company’s executives, responsible for comprehensive management and practical operations. Therefore, he asserted, as they retained the power to command and decision-making roles, both should be considered principal offenders.

During the trial, the procurator identified Ms. Geng and Mr. Qin as the publishing company’s executives, responsible for comprehensive management and practical operations. Therefore, he asserted, as they retained the power to command and decision-making roles, both should be considered principal offenders.

Hoping to decrease the burden on her husband and others aligned with the two related publishing houses involved, Ms. Geng assumed the responsibility and pled guilty to all charges. During the last round of “self-defense,” she stated:

This is a chance for self-declaration; not a chance for self-defense. I plead guilty to all charges and agree to all the evidence presented in court. I also clarify that everyone else acted according to my instructions. If all responsibilities could fall on me, I’d be more than grateful.

To prevent others who supported Ms. Geng as well as outsiders from entering the court during the trial, local police had created a cordon with police cars, Security officers stood on guard.

After the court’s verdict, Ms. Gao posted on Twitter:

I just heard Geng Xiaonan’s statement. Indeed, she has taken on all the responsibilities.
[Addressing Ms. Geng in the post]: “Xiaonan, with your sensible and generous attitude, it will not take three years…. You will obtain freedom before that. I hope you reunite with your elderly father quickly. We will embrace you with flowers.”

In supporting Ms. Geng, Netizen Zhangdong, accused the CCP of using politics to frame her case “into a case of economic crimes, again turning an economic case into an open political trial.”

In recent years, Ms. Geng had publicly supported Professor Xu Zhangrun, dismissed from Tsinghua University last year for writing a series of essays criticizing the CCP. She has also previously advocated for Chen Qiushi, a suppressed citizen journalist, and Ren Zhiqiang, a real estate agent. Many who supported Ms. Geng speculated that her standing up for others led to her downfall.

Nevertheless, her inspiring words at the end of her trial, “if all responsibilities could fall on me, I’d be more than grateful,” reflect her ongoing willingness to continue to stand for others—even at the cost of her demise.

###
There is one who speaks like the piercings of a sword,
But the tongue of the wise promotes health.
~ Proverbs 12:18 (NKJV)