Beijing's Family Values ——–The regime's playbook for hounding the wives and children of dissidents.

Beijing’s Family Values
The regime’s playbook for hounding the wives and children of dissidents. 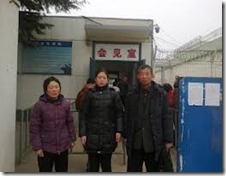 <http://topics.wsj.com/person/J/Xi-Jinping/6475> will be joined by their wives when they meet in California next week for the U.S.-Chinese presidential summit. The family occasion is as good a moment as any for Mr. Obama to ask Mr. Xi about his family values—namely, the value his authoritarian regime places on harassing dissidents’ spouses, siblings and children as a tool of repression.

The highest-profile example is blind lawyer Chen Guangcheng <http://topics.wsj.com/person/G/Chen-Guangcheng/6946>, who escaped last year from house arrest to the U.S. Embassy in Beijing and then to New York. Chinese officials promised Mr. Chen and their U.S. counterparts that they would investigate abuses against his family in Shandong province. Yet the abuses have intensified. Local thugs have repeatedly attacked his family’s homes with beer bottles and bricks. His nephew Chen Kegui was sentenced to 33 months in prison for defending himself when government agents stormed his home last year.

Kegui was diagnosed with appendicitis in April and initially denied a hospital visit. On Thursday he was allowed to speak with his father for the first time in weeks and reported that he visited a hospital from May 17-21, where he received medicine but not surgery. At least the conversation confirmed that he is still alive. As for his parents, they have been threatened with prosecution for "harboring" their own son.
Mr. Xi is following the same playbook in the case of Nobel Peace laureate Liu Xiaobo. While the democracy activist has sat in prison since 2009, his wife Liu Xia has been under house arrest—cut off from visitors, the Internet, phones and regular mail despite being charged with no crime. Now her brother faces 14 years in jail on tax charges filed this month.

Then there is lawyer Gao Zhisheng, currently in prison for defending Christians and Falun Gong practitioners, among other personae non gratae. In 2006, around the time of his first "disappearance" into official custody, Chinese security agents moved into his apartment building. At all hours, he later recounted, they made noise, played cards and smoked. They forced his children and wife, Geng He, to keep their bedroom doors open and lights on. Four agents escorted Mr. Gao’s adolescent daughter to school each day, following her into the bathroom and taunting her in front of classmates. At 15 she attempted suicide.

Beijing’s goal is to cow dissidents into submission. In between torture sessions, Mr. Gao’s jailers showed him video of his young son crying from hunger and told him that only if he sang revolutionary paeans to the Communist Party would they allow his wife access to her bank account to buy food. His wife and children escaped China in 2009 for the U.S., but Mr. Gao remains in prison.

Authorities this year denied schooling to the 10-year-old daughter of Zhang Lin, a lawyer and veteran of the 1989 pro-democracy movement. Officials have ensured that Christian activist Zhu Yufu’s brother be fired from multiple jobs. Security agents warned that they might "pay a visit" to the elderly mother of legal activist Liu Weiguo and in other cases have threatened to stop social-security payments to dissidents’ parents.

All this may seem minor compared to the economic, military and strategic issues Messrs. Obama and Xi will discuss. But there is a reason why, in a democracy, voters pay so much attention to the family lives of politicians. How you treat your family speaks volumes about your character. How Mr. Xi treats his critics’ families reveals the character of the regime he leads.