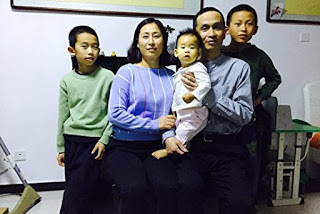 (Beijing, China—Feb. 14, 2020) As the coronavirus continues to grow in Wuhan, Beijing human rights lawyers have demanded the full disclosure of virus information. Another lawyer sent an open letter accusing the Wuhan Public Security Bureau of abusing its power during the spread of the virus.

On January 20, Xie Yanyi, an attorney previously involved in a nationwide crackdown on lawyers, appealed to the National Health Commission and other departments for the disclosure of information on the new coronavirus. To date, none of the departments have replied.

Due to this, his family members were harassed when they returned to his wife’s parent’s home in Liaoning province for the Spring Festival.

Mrs. Yuan said on Thursday that her sister received a phone call from the police station to inquire about the details of their return after the appeal was made public. On their way back to Beijing, Xie Yanyi received a call from the Beijing State Security Bureau, asking him to pay attention to his words and deeds, and advising his wife not to post on the internet.

On Twitter on January 21, Xie called for the heads of the Wuhan municipal government, the municipal health commission, and the National Health Commission to be held accountable for both the coronavirus’s rapid growth and the officials abuse of power in the wake of the epidemic.

In particular, the Wuhan Public Security Bureau detained eight whistleblowers for initially disclosed the truth about the virus. This group of doctors found the situation similar to the SARS virus and warned their relatives and friends.

In addition, Cheng Hai, another human rights lawyer in Beijing, sent an open letter to the Central Committee and the Hubei Provincial Commission for Discipline Inspection, the Political and Legal Commission, the State Council. and the Ministry of Public Security on Feb. 1, accusing the staff of the Wuhan Public Security Bureau of abusing their power in order to punish the eight whistleblowers.

Cheng pointed out that the behavior of the Wuhan Public Security Bureau allowed the virus to spread outside China. The information suppression of the epidemic lasted for three weeks, causing serious harm by allowing the virus to reach hundreds.

He also pointed out that the group spread useful rather than harmful information, reminding society to be alert. Therefore, he believes the public security department has committed a crime by detaining these individuals.In Wuhan, the coronavirus broke out in December 2019 and continues to spread. On Jan. 23, Wuhan was the first city to be closed to try to contain the epidemic. As of Feb. 5, 34 cities in China were closed. According to China’s official numbers, the epidemic has killed more than a thousand people thus far, although some experts estimate the number may be higher.