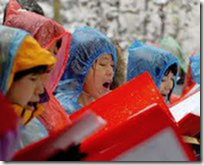 Beijing Pastor’s Joint Prayer Support (Week 4)
Pray for Beijing Shouwang Church (4)
Dear brothers and sisters, peace!
April 24th was an Easter Sunday, a day to remember and celebrate the resurrection of Jesus Christ. Jesus Christ was crucified on the cross for man’s sin, but resurrected on the third day. “Jesus was delivered up for our trespasses and raised for our justification.” (Romans 4:25) After Good Friday, a day full of despair from man’s perspective, Easter inaugurates a new chapter in history and brings eternal hope to mankind! Although there is no substantial progress for Shouwang, we set our ultimate hope on the Risen Lord; “With man it is impossible, but not with God. For all things are possible with God!”(Mark 10:27)