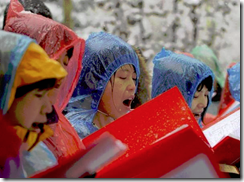 Peace in the Lord! The outdoor worship service of Shouwang Church since April 10, 2011 came to an end on December 25, 2011. The church governing committee thus decided to have indoor Sunday service, and rented a place for indoor gathering. However, all of the three places the church rented for Sunday service on January 1 cannot be used for indoor gathering since the government interferes. Therefore, the church decided to have outdoor worship service on the third platform of Zhongguancun Square.

The government has been trying to prevent Shouwang from having indoor worship service through all kinds of means, pressing the landlord or the owner of places we rented to cancel the lease contract, and even claims that it is impossible for Shouwang to rent a meeting place for gathering as a whole church. However, the church will continue to make efforts to gather indoors. May the Lord open a way for his church, so that we can worship indoors together soon, and that co-workers and believers who are under house arrest can have freedom soon.