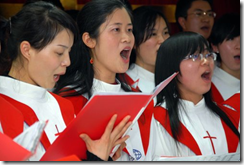 Peace in the Lord! On this past Sunday, we held the sixteenth outdoor worship service of this year. It was a cloudy and windy day, and believers continued to worship our Lord Jesus Christ with faith and hope.

Last Friday, the same sister was once again taken away to be detained in a hotel and was not released until Sunday morning. As far as we know, on Sunday morning, at least eleven believers were taken away from locations near the platform for attending the outdoor service. Two believers were released on the way, and the rest of them were sent to four local police stations. Eight believers were released around 13:00 pm. And the last believer detained in Olympic Village Police Station was released around 23:00 pm on Sunday.

We have gone through four seasons since we started our outdoor service, and have experienced ups and downs. However, the Lord’s help has been with us in each week, and the Lord’s glorious Spirit has been touching us, guiding us, and protecting us on each Sunday. After one-year period of outdoor service, we now continue to pray that the God of all grace, will himself restore, confirm, strengthen, and establish us. To him be the dominion forever and ever. Amen! (1 Peter 5:10-11)