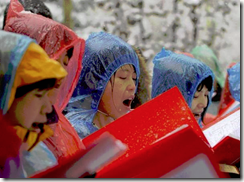 Peace in the Lord! On December 18, Shouwang had her thirty-seventh Sunday outdoor worship service. As Christmas is approaching, each police station puts more force in guarding and watching believers. Many believers were detained at home since Saturday, and a sister was detained in a hotel nearby since Friday. As far as we know, on Sunday morning, at least thirty-five believers were taken away for going to the planned location to join the outdoor service, either at the spot or on their way there. Except for a few believers who were released on the way, most of the rest were sent to fifteen local police stations in their respective area. Besides them, five believers waiting outside of Haidian Street police station were also taken into police station to be detained by violent policemen for no reason. Till midnight, forty believers were released home. The last believer detained at Sijiqing police station of Haidian District got released around 10:00 am on the 19th.

Last week, Google Company shut down Google Buzz, and replaces it with Google+, which makes it inconvenient for believers who have been reading our update of outdoor worship through Google Buzz. For those who want to read about our outdoor worship, you now need to use Google+. In this special period, we also pray that God will help those who want to be informed of our situation can access this platform, or can find other access, so that they can pray for us.

During this Christmas season, we also pray that God will stir each believer in his church by his Spirit, to share the Gospel of peace and life to people around them. We pray that God will show mercy to this country and to this city, that more people in desperateness and darkness can hear the Gospel of peace, receive God’s grace, and get this priceless gift of eternal life.

Today is the day we call all the members of our church to fast and to pray for Shouwang Church. May God have mercy on his church, send his messenger to prepare the way for his church, and grant us the place for worshipping him he prepared for his church. Although God has his timing, we still deeply desire that the time he appoints would come this week. “They shall be mine, says the LORD of hosts, my special possession on the day when I act, and I will spare them as parents spare their children who serve them.” (Malachi 3:17) May God hear the earnest prayers from us as our whole church prays in unity.