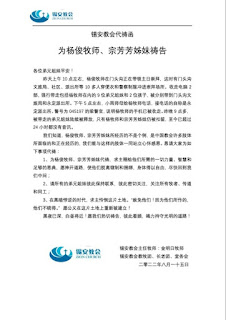 When Pastor Yang Jun was preaching around 10 AM, more than 10 individuals from the Mentougou District Culture and Tourism Bureau, community management office, and police station suddenly rushed into the church. They confiscated two computers and took away nine Christians and two children, including Pastor Yang Jun. Officials took some to Memtougou District Culture and Tourism Bureau and others to Yongding Police Station.

At around 5 PM, Pastor Yang’s wife called him. However, a police officer Mr. Liang (police number: 045197) from Yongding Police Station answered the phone. He said Yang’s cell phone had been confiscated. Later that evening, authorities released some of the Christians. Only Pastor Yang Jun and Zong Fangfang were still held there. When Beijing Zion Church posted their prayer request letter, 24 hours had already passed without any news about them.

Beijing Zion Church is the biggest house church in Beijing. Pastor Jin Mingri, founder and lead pastor of the church, advocates for bringing Chinese house churches into the public sphere. Zion Church also refused to join the Three-Self Church. Members have been persecuted by the Chinese government and have drawn focus to Chinese churches from all over the world. On September 9, 2018, the Beijing government issued a ban notice to Beijing Zion Church. On the same day, more than 70 people raided their church. Beijing Jianweitang company, to which Beijing Zion Church is affiliated, was asked to pay ￥1.2 million (~$177,160), including ￥800,000 (~$118,013) overdue rent and other fees.  On April 28, 2021, minister Qie Jiafu and minister Huang Chunzi were taken away from home, administratively detained, and fined for serving the church.

On August 15, 2022, Pastor Jin Mingri and other ministers posted a prayer request letter for Pastor Yang Jun and Zong Fangfang.  The prayer letter is as follows:

As we all know, the suffering of Pastor Yang Jun and sister Zong Fangfang is not a single case, but what many Chinese Christians are undergoing. We are very grateful for such family members in Christ like them. We ask fellow Christians to pray:

The night is nearly over; the day is almost here! Please pray and care for each other and hold tight to the bright path!

The suffering of Beijing Zion Church is not an isolated incident. Early Rain Covenant Church and Beijing Shouwang Church faced persecution within the same week. Whether or not these cases signify a change or shift from the Chinese government remains unclear.