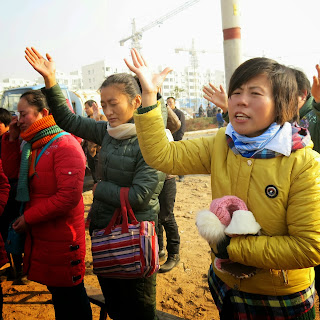 
(Nanle County, Henan—Jan. 4, 2014) Several believers from the Nanle County Christian Church in China’s central Henan province, including the pastor’s daughter, have been released; however, as many as 13 remain in custody.

Six days after Zhang Shanshan, the Nanle County Christian Church’s pastor’s daughter, Ren Tiantang and Fan Ruimin went missing on Dec. 21, they were released from detention. No detention notices for the three were issued.

“Officers from the Religious Affairs Bureau and the United Front Work Department sent me home. After arriving in town, they returned my cell phone and camera, except the video camera. I left belongings in Zhang’s place before the detainment, and I had no money. They gave me 10 yuan so that I could take a bus home,” Ren, who is from Beijing, said.

By the next day, 23 more believers had been detained on charges of “gathering a mob to disturb social order.” The detainments came after a series of persecution against the church in retaliation to Zhang Shaojie and a group of Christians’ trip to Beijing to petition the government regarding a land dispute.

Some of the detained believers were released after a one-month detention, but six people, including Zhang Shaojie, were officially arrested.

Harassment
The pastor’s family continues to be harassed, including the disconnection of family’s Internet. The tires of a vehicle parked outside the home were slashed as well.

“Our Internet was cut off…a few days ago. We were unable to connect to the Internet and asked the carrier to fix it,” Zhang Shanshan said.

“Someone must have cut the wire so that they couldn’t use the Internet. The carrier came in and said it was missing a part. They replaced the cable today, and the Internet is working now,” a believer close to the family told ChinaAid.

“We’ve verified that Zhang’s Internet wire was cut intentionally, which is a crime against communication and security law. Zhang’s family told us that even after it was fixed, the connection wasn’t stable. We have reported the case to the local police, and the perpetrator should be punished by law,” said Xia Jun, the lawyer representing Zhang Shaojie and heading the delegation of 15 lawyers working on the defense of the detained believers (https://chinaaid.org/2013/11/update-lawyers-for-nanle-county.html).

The Internet wasn’t the only thing targeted. “I parked outside Zhang’s place last night and found the tires were flat this morning. I checked around and saw stab marks. I was told by a mechanic that it must have been deliberate,” the owner of the car said.

Also, a group consisting of both lawyers and believers were trapped in the Zhang home on Dec. 23 when a mob surrounded the house, refusing to allow anyone in or out (https://chinaaid.org/2013/12/surveillance-violence-continues-against.html).

Lawyer faces revocation of law license
In addition to the harassment faced by Zhang Shaojie’s family, Xia learned, through a leak, that authorities may revoke his law license.

“The judicial authorities now are taking action and revoking my license. But I told Ren Tiantang I wasn’t afraid of losing the license. The government should be punished because of the crimes they’ve committed. I don’t fear death so why should I care about losing my license?” Xia said.

After facing much opposition from authorities, Xia resorted to attention-getting measures on many occasions, such as standing outside the Nanle County Public Security Bureau with a cloth lantern that read “Looking for Zhang Shaojiie” (https://chinaaid.org/2013/11/more-governmental-obstacles-faced-by.html).

The group later encountered trouble when representatives, including Xia, attempted to file suit against the local police department at the Nanle County Procuratorate’s Office. A large group of citizens, hired by the government to intimidate the group of lawyers, trapped Xia, two other lawyers and reporters from the U.K.’s Sky News in an empty office for hours (https://chinaaid.org/2013/12/nanle-county-christian-church-lawyers.html).

Church persecution
Furthermore, Nanle County Christian Church members who tried to hold a worship service on Sunday were dispersed. The Church has continually had to relocate in order to attempt to hold their worship service (https://chinaaid.org/2013/12/nanle-county-christian-church-spends.html).

“Since Pastor Zhang Shaojie was detained, we’re under closer surveillance,” one believer from the church said. “Fewer people are coming to worship today—some can’t get in; some dare not come [for fear of being detained].”

The church issued an appeal for aid and a copy of a protest permit application in late November (https://chinaaid.org/2013/11/nanle-county-christian-church-appeals.html).

ChinaAid
ChinaAid calls on the relevant authorities to respect the Constitution and end their persecution. We also call for intervention in the judicial process and protection for the lawyers against undue persecution.