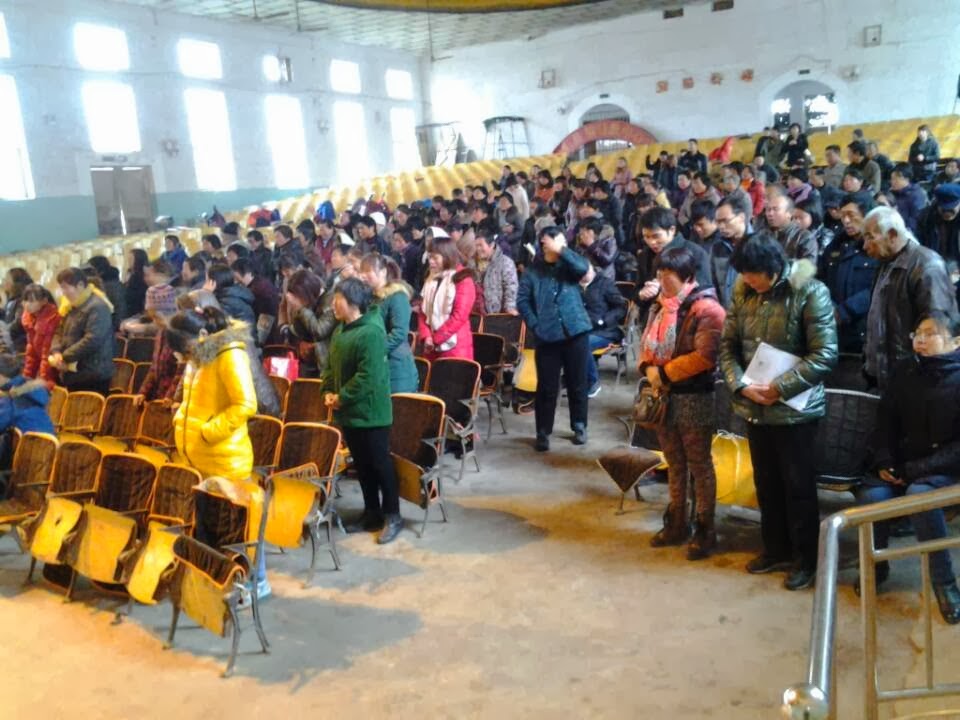 (Nanle County, Henan—Jan. 7, 2014) Some Nanle County Christian Church believers were once again blocked from attending church this Sunday; also, one released Christian and the lawyers defending the group speak out about the man’s release and their plans to take their complaints to the Henan Provincial Procutatorate.

As of Sunday, members of Nanle County Christian Church in inland China’s Henan province are still blocked from entering their church building by government officials, who stand guard at the doors.
“There were only 11 people for today’s gathering, and there were two children in addition,” one church member said. “There were eight of them who stood outside the church and wouldn’t let us believers in. They said they wanted us to understand them. This is because we would have to ask for approval from their leaders if we wanted to get together and get in. They blocked the way of about 20 believers.”

Released from detention
Cao Nan, missionary from Shenzhen, a major city in southern China’s Guangdong province, was released on Saturday, but his cellphone and other items were retained by the authorities (https://chinaaid.org/2014/01/believers-from-nanle-county-christian.html).

Cao Nan’s younger brother, Cao Lei, confirmed that his brother had been released. Cao Lei said when his brother was released, they went together to the Nanle County Public Security Bureau to find the officer in charge of the case. “We also went to the leader of the security squad, named Shi, and we wanted to get back from him the cellphone confiscated by them. However, they didn’t give us the cellphone, saying that they couldn’t find it. We asked them to look for it, and we could wait for a while. Two hours later, we went back to them, and they still said ‘We couldn’t find it,’” Cao Lei said.

Cao Nan was detained on Dec. 24 when, after being trapped in the Zhang family’s home since the prior day, he attempted to fight his way through the group of people, plainclothes officers and citizens according to Cao Lei, guarding the door (https://chinaaid.org/2013/12/surveillance-violence-continues-against.html). “They were holding in their hands stones and bricks. My brother was afraid of an incident so he took a kitchen knife. Then he was chased by the plainclothes officers and taken into custody,” Cao Lei said.

Cao Lei said his brother will make a complaint to the relevant authorities in charge of discipline inspections in Henan.

“[The authorities] must think the whole thing is over after they release the person. Why did they take people into their custody in the first place? Why did they rob people of their money and belongings? We will pursue this case to the very end. They are suspected of violating many laws, and we have recorded every one of them.”

According to Xia, the delegation of lawyers are traveling to Zhengzhou, Henan’s provincial capital, on Jan. 10. “Jan. 10 is the date for urgent action. We will go and sue Nanle County Public Security Bureau and the director of the detention center.

“During this time, we will make a demonstration to arouse people’s concern for this matter,” Xia added. Xia and the other lawyers have previously taken brazen actions to draw attention to the case (see https://chinaaid.org/2013/11/more-governmental-obstacles-faced-by.html and https://chinaaid.org/2013/12/update-nanle-county-christian-church.html).

Xia asks that Christians pray for the situation as the lawyers begin taking the case to higher authorities.

Of the remaining 13 believers in official custody, six have been placed under official arrest while the rest await some sort of legal procedure to determine their fate (https://chinaaid.org/2014/01/believers-from-nanle-county-christian.html).