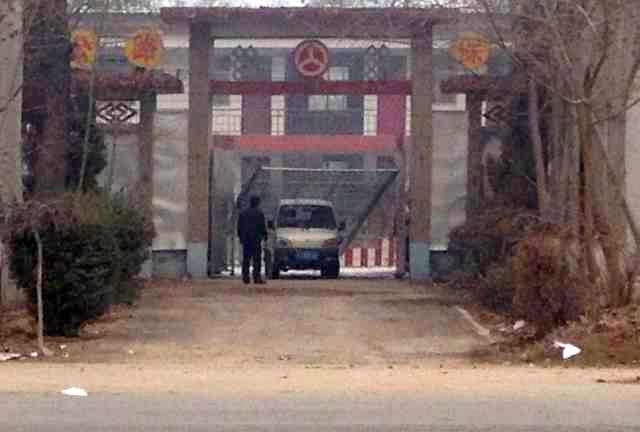 
(Nanle County, Henan—Feb. 18, 2014) Nanle County Christian Church members and ChinaAid founder and president Bob Fu reported the existence of a black jail in the county in central Henan province, effectively causing the jail to close on Sunday, but the three (corrected Feb. 20) Christians who were held there were transferred to an unknown location.

Believers told ChinaAid that when a CCTV report recently exposed the existence of black jails in Henan, it made them think of the detention center where their loved ones were detained, which had three rows of barbed wire fences surrounding the building.

Nanle County Christian Church members took to the Internet to express their belief that the detention center was an illegal holding facility.

On Saturday, Fu called the Henan Bureau of Letters and Calls, a department commissioned to handle complaints and disputes, to report the black jail and inquire about the location of the three believers whose location has been unknown since their detention (corrected Feb. 20). Fu was told it would take two months for the bureau to resolve the matter; however, the jail was empty a day later.

Believers reported finding the prison empty Sunday morning, with the iron gate removed from its place.

“For a long time, we have known that Li Cairen was detained there,” an anonymous Christian said. “When we saw the news that exposed the black jails in Henan, we tipped off the authorities. No one in the government gave us a reply about how they would handle the black jail. Today, we saw they were moving out, and they removed the surveillance cameras and hauled stuff away. The detainees were also moved.”

“It must have been in evening or at night when they moved the people out. During the day, we saw they were hauling items, but not people,” another believer said.

Pastor Zhang Shaojie’s daughter Zhang Shanshan told ChinaAid that she entered the vacant jail and found a mess, as if someone had left in a hurry. “We only went to the first floor, and there are seven rooms in a row. As for the room where Li Cairen was detained, we found many surveillance cameras were removed, and they were very new.”

Christians told ChinaAid that conditions in the jail were squalid. “Inside the jail, we saw ripped clothes and leftover steamed buns,” one person said.

“We also found bananas, tangerines and steamed buns. The steamed buns were cold, and they looked like buns from yesterday or this morning. We also found several bottles of…urine,” Zhang Shanshan said.

“Starting from kidnapping Sister Li Cairen to illegal detention, the Nanle authorities have never notified her family during this long period of time. This not only seriously tramples on the relevant laws, it is also illegal kidnapping and illegal detention. Besides, they also deprived the believers of their religious freedom,” Fu said.

Guo Zhongqiang, a missionary who was detained in the illegal jail until recently, told ChinaAid that his cell was near Li’s cell. “A few days ago, I heard someone crying next door, and she said her son had died, and they were still persecuting us. She cried every day. At first, I didn’t know who she was. Then, when I passed by there, I saw it was Li Cairen. Then I heard a voice: ‘You should blame it on Zhang Shaojie and just say he has brought you into this situation.’ They tried to force Cairen to say this, and every day they took her away for interrogations.”

Another missionary, named Shi Zhixuan, was also held in the black jail. “I was detained in the black jail for a week. In the evening, the brought me to the black jail from the [Nanle County] Detention Center. For 24 hours, they didn’t allow me to leave the room. Except to use the restroom, I stayed in the room, even for eating and sleeping. There, people tried to brainwash me by saying my conduct violated the law. They also threatened me not to talk to an attorney or reporters after I was released. Inside the facility, I lived with Zhao Guoli, Wu Guishan, Yan Jingxue and others. Each of us stayed in one room and were guarded by special people.”

Guo and Shi were not reported as Nanle County Christian Church members reported, and at this time, neither what, if any, affiliation they have with church nor the details surrounding their detentions are known.

Li Cairen lost her son in a workplace accident three years ago. The Nanle County Christian Church helped raise funds for his funeral.

Pastor Zhang Shaojie was detained on Nov. 16, prompting the detention of more than 20 church members, including Li Cairen, who authorities say is the victim of the fraud charge Zhang Shaojie is facing. In addition to fraud, the pastor is charged with “gathering a crowd to disrupt public order.”

Zhang Shaojie’s trial will begin on Feb. 21 at the Nanle County Court, despite lawyers’ attempts to get a change in venue.