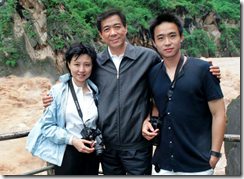 “As far as we know, there’s nothing to those reports; he remains at school at Harvard,” Mark Toner, a State Department spokesman, told reporters in Washington. The Wall Street Journal reported April 16 that Bo Guagua, 24, had left his apartment in Cambridge, Massachusetts, escorted by private security guards. Bo’s mother, Gu Kailai, is under suspicion by Chinese authorities of murdering U.K. citizen Neil Heywood.

Focus escalated this week on people linked to Bo Xilai, who had been seen as a candidate for China’s top policy making body in the selection of the nation’s next generation of leaders later this year. China has detained dozens of people connected to the former party boss of one of the nation’s largest cities, according to the U.K.’s Telegraph newspaper.

While the Communist Party has sought to portray the effort as a narrow legal investigation, a broader engagement on economic and social policies is under way, according to Li Daokui, director of the Center for China in the World Economy at Tsinghua University in Beijing.

“There have been concerns that he was promoting a Cultural Revolution-style approach to our social tensions,” Li, a former adviser to China’s central bank, said in a Bloomberg Television interview yesterday. “This is mostly about the future direction of China’s reform.”

Bo Xilai had championed the state’s role in finance and industry, creating large conglomerates by merging more than a dozen smaller state companies. Bo also reintroduced songs and slogans from the era of Chairman Mao Zedong to re-instill a socialist spirit.

The new leadership of Chongqing, a southwestern city that’s expanded faster than the national economy’s average in recent years, has started an overhaul of government investment projects, the Journal cited an unnamed local official as saying.

Two commentaries in today’s English-language Global Times said the Bo case should not be seen as a political struggle within China’s top leadership. One of the commentaries said “some in the west” had overestimated Bo’s influence and that the only way for officials to realize their ambition is to promote the Communist Party line.
In another commentary yesterday, China’s official Xinhua News Agency said the nation’s development “will not be hindered” by the case against Gu Kailai, the investigation of Bo for discipline violations and the Wang Lijun incident.

Wang Lijun, Bo’s former police chief, who spent the night of Feb. 6 at the U.S. Consulate in Chengdu, had concluded Gu Kailai poisoned Heywood, a Briton who had business links with the Bo family, the Telegraph newspaper reported this month.
Toner, the State Department spokesman, declined to comment on whether Wang had requested asylum. U.S. authorities never publicly announce asylum requests, even if granted, according to Chris Bentley, a spokesman for the U.S. Citizenship and Immigration Services.

Gu Kailai, 53, is suffering from bone cancer and may have only a year or two to live, the Hong Kong’s Standard newspaper said, citing an unidentified person in Beijing.