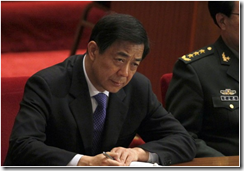 Ng Han Guan/AP – Bo Xilai, Chongqing party secretary attends the closing session of the Chinese People’s Political Consultative Conference held in Beijing’s Great Hall of the People, China, Tuesday, March 13, 2012.
By Keith B. Richburg and Andrew Higgins, The Washington Post
BEIJING — The unceremonious firing Thursday of Bo Xilai, the populist Communist Party chief of the southwestern mega-city of Chongqing, was seen by some observers here as a victory for China’s reformers and a stinging defeat for those known as the “new leftists,” for whom Bo had emerged as a champion.
Gallery 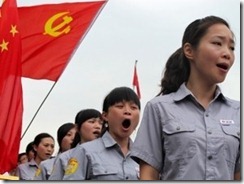 Chongqing, a sprawling municipality of 32 million people, embarked on a campaign championed by Bo Xilai to promote “Red Culture” to remind residents of the past glories of China’s Communist Party last summer. 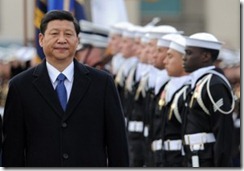 But with the party’s internal wrangling shrouded in secrecy, the latest twist in China’s most tumultuous political drama in years has left many — from ordinary Chinese to foreign China-watchers — perplexed about what is really going on behind the vermilion walls of the Zhongnanhai leadership compound in Beijing.
During his more than four years as the party chief in Chongqing, Bo — the son of an early revolutionary hero — had led a crackdown on crime and a revival of Mao-era patriotic songs and sloganeering while promoting an economic model that emphasized a more equitable distribution of wealth. His approach, known as the “Chongqing model,” attracted the support of modern-day Maoists and others critical of China’s growing income disparity.

But Bo’s populism and his authoritarian manner — which prompted accusations that he and his security forces ignored laws and human rights in their anti-crime crusade — unnerved some central government leaders in Beijing. His “red revival” campaign also triggered unwelcome memories of the violence and chaos of Mao Zedong’s 1966-76 Cultural Revolution.

“Basically, his political career is at an end,” said Zhang Ming, a political science professor at Beijing’s Renmin University. “The Chongqing model is also over, and the chance of [China] turning leftward is finished.”

Jiang Weiping, a Chinese journalist who spent five years in jail after he published articles accusing Bo of shielding corrupt officials in the 1990s, said the Chongqing party chief’s ouster marked an “absolute victory” for more forward-looking officials after a long tug of war between rival factions. But even he acknowledged that “we don’t have any firsthand information” about decision-making at the summit of the party.

During Bo’s tenure in Chong¬qing, neither President Hu Jintao nor Premier Wen Jiabao traveled to the province-size city of 32 million people — an omission that analysts said reflected official displeasure with Bo’s “new left” approach and what many called his media showboating. Interestingly, one who did venture to Chongqing was Vice President Xi Jinping, the apparent presidential successor who in December 2010 heaped praise on Bo’s social welfare model and his “red revival” campaign.
On Wednesday, the day before Bo was fired, Wen made a spirited case for more political reform and openness in China and repeatedly warned of the danger of China slipping back into another Cultural Revolution. Wen’s warnings in retrospect were seen as directed at least partly at Bo’s “red revival” campaign.

Beijing authorities were already investigating Bo’s anti-crime crusade because of allegations that the targets were often wealthy Chongqing businessmen. Bo’s right-hand man in the crackdown was his then-police chief, Wang Lijun, who himself became the subject of a corruption probe and was demoted this year. On Feb. 6, Wang fled Chongqing for Chengdu, more than 200 miles away, and took refuge for a day at the U.S. Consulate before being escorted to Beijing by Chinese security officials.
One of the targeted businessmen, Li Jun, who fled Chongqing in 2010, issued a statement from his hiding place abroad, saying, “I am delighted that Bo Xilai and Wang Lijun have now fallen.”

Li, who founded Chongqing Junfeng Industrial Development Group, a big property and trading company, urged Beijing to “thoroughly investigate their criminal acts. Their crimes must be answered for.”

In a lengthy interview last month with The Washington Post, Li accused Bo of colluding with a senior People’s Liberation Army officer, Zhang Haiyang, to grab property that his Junfeng Group had purchased from the military. He said that Bo had close ties stretching back decades with Zhang, who is now political commissar of China’s nuclear missile forces.

Zhang Xin, the head of Soho China, a large private property developer, and no relation to Zhang Haiyang, said in Hong Kong on Thursday that Bo’s downfall “is definitely an encouraging sign.”

“A lot of people had begun to wonder where China is heading,” she said, adding that Wen “made clear that China will reform . . . and that economic reforms are not possible without other reforms.”

Jiang, the journalist who was jailed, said by phone from Canada that the now-purged Chongqing party chief — who for the time being still retains a seat on the Politburo — “was running against the tide and had to be stopped.”