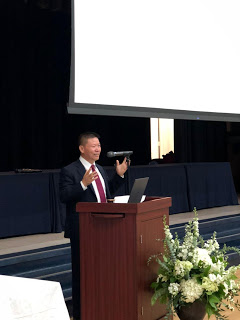 (Alexandria, VA— Sept. 12, 2020) Dr. Bob Fu spoke on “Christian Persecution is Real” at the Basilica of Saint Mary’s 2020 Saints Peter and Paul Conference. During the Tiananmen Square democracy movement in China during 1989, Fu the founder and president of China Aid, served as a campus student leader. Although tortured in a Chinese prison for his faith, Fu, like others have reported at times, experienced God’s unspeakable peace.

To help the audience “see” one of the many mean-spirited, torture tactics officers used, Fu reenacted one routine “exercise” prisoners had to practice each morning. He explained that holding both arms straight ahead, palms down while sitting in a chair, prisoners also had to extend their legs out for 8–10 hours. If someone moved and failed to maintain this exhausting, painful position, guards beat him.

In a second-degree, excruciating exercise, known as “bearing the sword,” guards ordered prisoners to hold their hands pointed down with palms together behind their backs. Then the officers demanded that prisoners twist their hands to point upward. At times, the torturers added a chain and attached one… two… or three bricks to make the “exercise” even more harrowing. Sometimes, they would attach a stake between the prisoner’s hands. With prisoners’ hand positioned in front, guards could use this bar to lift the prisoner off his feet and leave him hanging in the air.

Using a third, even harsher exercise, known as “little chick eating rice,” officers shackled a crouching prisoner’s hands, clasped together in front with palms facing each other, to their ankles. A prisoner had to struggle to balance himself enough to bring food to his mouth with his contorted hands. Fellow inmates often guarded victims during punishment exercises. On one hand, guards promised inmates benefits. On the other hand, officers threatened to punish fellow inmates if they showed mercy to the victim.

Instead of the work of the hands of the Chinese Communist Party (CCP) destroying Christianity, as they planned, persecution of Christians, even in the midst of suffering, has increased their numbers and faith. In 1949, statistics revealed that the number of Christians in China totaled less than one million. Today, Purdue University estimates that number has grown to more than 130 million, more than a 100-fold growth.

Only God can do that.

When we do what we can do, God blesses our efforts. To support persecuted and imprisoned Christians in China as well as encourage other brothers and sisters suffering in our world, we can:

During this time in the midst of “real” Christian persecution throughout our world, God calls us to listen. “Hear, O Israel: The Lord our God, the Lord is one” (Deuteronomy 6:1).

Fu encourages those with “ears to hear” to pray for brothers and sisters who physically “bear the cross” of persecution for their faith. As Fu communicates with families of as well as those who have experienced torture, they tell him they know God answers prayers. They, as Fu, have experienced God’s real, unspeakable peace, even in real persecution… even in a so very real Chinese prison.
China Aid exposes abuses in order to stand in solidarity with the persecuted and promote religious freedom, human rights, and rule of law. If you wish to partner with us in helping those persecuted by the Chinese government, please click the button below to make a charitable donation