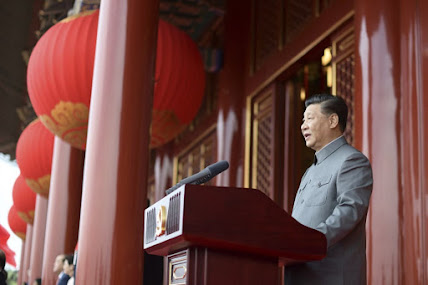 The Chinese Communist Party (CCP) is celebrating its 100th anniversary, and even state-approved churches are being compelled by the government to celebrate the centennial of the atheistic, totalitarian regime. Unfortunately for the Chinese people—and especially for religious believers—China’s economic advancements and increased global prominence have been stained by religious persecution and political oppression at the hands of the CCP.
Church choirs and congregations across China are waving the red flag and dancing behind church pulpits singing “the grace of the Party is deeper than the sea” and “listen to Party’s words, follow Party’s path.” Being forced to adopt and praise party values is the price churches must pay to be officially approved to operate in China under the umbrella of the Three-Self Patriotic Movement or the China Christian Council.

These blatant violations of religious freedom are just the latest examples of a long history of persecution perpetrated by the CCP. Shortly after the party’s birth, it fomented what is now referred to as the Anti-Christian Movement of 1922-1927. Seizing upon the country’s nationalist sentiment, party propaganda asserted “one more Christian in China, one less Chinese.” One hundred years later, the party still feels threatened by Christianity and pressures churches to adopt socialist values and conform to party doctrine.

Under General Secretary Xi Jinping’s leadership, the party’s view on religion has hardly changed. This time, the methodology is “sinicization,” whereby Christian doctrine and practice must be made compatible with communist ideology. Bibles have been removed from all online stores. Minors are prevented from attending church. Unregistered “house churches” face government intimidation and harassment. At every turn, the CCP has made it more difficult for people to practice their faith in China.

In place of authentic religion, the Chinese people have been encouraged to apply religious devotion to the party. To prepare for the 100th anniversary, state media has called former revolutionary bases “holy sites” and used language that indicates pilgrimages to the states are intended to foster communist “faith.” And as the party requests that images of Jesus be removed from churches across China, portraits of Xi Jinping have been installed to replace them.

As the CCP plans its anniversary festivities, what achievements from the past 100 years is it celebrating?

The party has successfully risen to power, but its efforts to maintain that power over its more than 70 years of rule have caused immense suffering for the Chinese people, especially those inclined to think independently or worship a higher authority than the CCP. Millions of unborn babies were forcefully aborted under mandated family planning policies. Tens of millions of Chinese people were murdered or starved to death due to CCP’s political campaigns.
Under CCP rule, it is likely that China is currently persecuting more people of faith—including Christians, Uyghur Muslims, Tibetan Buddhists, and Falun Gong practitioners—than the rest of the world combined. This includes the 1-3 million Uyghur Muslims currently detained in over 380 internment camps in Xinjiang.
The CCP has proven that it can accomplish a great deal, but often at the expense of its people. Today’s CCP is unfortunately not all that different from what it was 100 years ago. The party has demonstrated its staying power, and now the free countries of the world must decide how they will interact with a single-party authoritarian government that is increasingly powerful on the world stage.
Recognizing this global challenge, a recent joint communique from NATO stated that the party-state Chinese regime posed “systemic challenges to the rules-based international order.” The implications of human rights abuses committed inside China’s borders extend outward. The CCP’s policies are something the world will be forced to confront.
The free world must unite over shared values, including religious freedom, the protection of human rights, the rule of law, and democracy. When the Chinese Communist Party violates these values, it must be met with condemnation and resistance. One hundred years is already far too long for the Chinese people to put up with a political party bent on serving only itself.

###
Deliver me, O my God,
out of the hand of the wicked,
Out of the hand
of the unrighteous and cruel man.
~ Psalm 71:4 (NKJV)
China Aid exposes abuses in order to stand in solidarity with the persecuted and promote religious freedom, human rights, and rule of law. If you wish to partner with us in helping those persecuted by the Chinese government, please click the button below to make a charitable donation.